You might think someone who spends his life keeping other RVers safe, dry and ticking down the road would rather not see an RV in his scarce free time—not so for Eric Solberg, a Vancouver RV on-location repairman.

Instead, he drives to the Okanagan two to three times a year, takes his 1990 Winnebago out of storage and lazes in the sunshine.

Explaining that his RV only travels about 60 kilometres a year, in and out of storage, he said, “That means less repairs for me when I’m on vacation—and when I am on vacation, I tell people I work at the post office.”

Complete with a dry sense of humour, Eric is a man who, since 1980, has earned an excellent reputation for the quality of his work. So when I went looking for Canadian-based information about repairing and replacing RV windows, he was the person I called. As you’ll see, I didn’t get as much detail as I’d expected but his advice was to the point and worth heeding.

Apparently, Eric doesn’t get many calls for glass repairs because minor work can be done by regular autoglass companies, and if a window-frame is damaged, that often means ordering manufacturer's parts through a dealership.

He says trying to repair factory leaks on location is difficult because by the time a leak is noticed, the weather usually doesn’t allow for a decent repair.

“If an immediate repair is needed, the best bet is for an owner to get the RV into a climate-controlled shop or,” he continued with a wry and rainy Vancouver grin, “tarp it and wait for summer when I can fix it on-site.”

Looks like my windows story will have to wait.

Turns out Eric’s most common call-outs concern repairs to appliances, electrical and plumbing. Over my 26 years as a full-timer, I’ve had them all—some more than once. When I asked which jobs he most disliked, I expected Eric to say, "jobs on toilets and sewer lines." Instead, his answer was “anything that involves crawling under the RV.” Is that why he was happy to repair my fridge by climbing to the roof of my rig to remove two wasp nests from the vent?

Talking of roofs—if you’re thinking of buying an RV, Eric’s unequivocal recommendation is to ensure it has a rubber roof.

Although I was lucky to escape unscathed, I plead guilty to that one. I only ever remembered it when Eric was around to check the water level. Indeed, judging by what I’ve seen around me over 26 years, attention to general maintenance beyond an exterior wash is not high enough on full-timers’ lists. Seems too many RVers are like me in thinking "if it ain’t broke, leave it alone."

Maybe some entrepreneurs could offer twice-yearly, all-systems checks in the hope of preventing problems before they become expensive?

I received my come-uppance at last when I asked Eric to tell me about the most bizarre call he’d ever had:

“I had a call from one customer who said his furnace started making loud clanging noises in the middle of the night, so he shut it down. I removed the outside furnace cover and exposed a blower wheel with a quarter of its plastic fins broken. When I removed the wheel, there was a big mouse with no head. Inside the wheel when the motor started up, he’d tried to escape but the rest of him flew into the combustion chamber and is now mouse jerky.”

Well, I did ask the question, right?

Eric Solberg learned his trade at several small B.C. RV dealerships, moved on to “a couple of larger ones and in 1993 decided to start my own mobile repair business.” 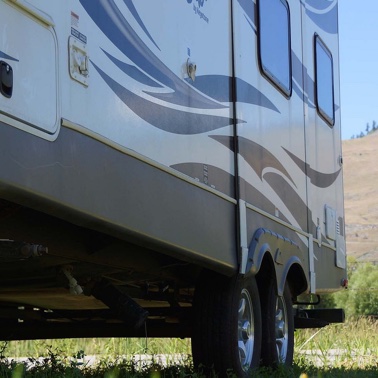 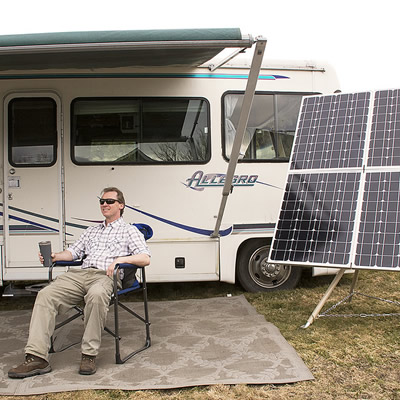 Self-sufficient on solar—navigating the world of RV solar kits

The ins and outs of choosing and installing a solar power kit for your RV.