Approximately 587 Vixen 21 motorhomes were produced by the Vixen Motor Company at One Silverdome Industrial Park in Pontiac, Michigan between 1986-1989

You might call this a drive-by edition of the Vintage RV column. Last week while traveling through the city, I spotted a very unique RV plying the streets of our fine town. It had that other-world look to it - a relic of a science fiction show? It was a model that I was completely unfamiliar with and it immediately grabbed my attention.

It turns out that it was a Vixen 21 - 3,000 Supercharged motorhome. I still swear it could have been something straight out of Star Trek. I never did get the drivers attention, so literally, I had a fleeting glimpse of the Vixen 21 as it scurried along the streets and roads — I am not sure if they were lost or just looking for the local campground because the unit darted all over town.

It turns out, like many obscure motorhomes and RVs, there is quite a following when it comes to the Vixen Motorhome. Who would have guessed?

Here's what one dedicated website had to say about the history of the Vixen motorhomes:

"Approximately 587 Vixen 21 motorhomes were produced by the Vixen Motor Company at One Silverdome Industrial Park in Pontiac, Michigan between 1986 - 1989 when the company closed. Retail value ranged between $40-$53k. Each model got between 22-30 mpg.

Three models of Vixens were created:

Its motorhome appointments include:

The Vixen is a fully self-contained RV but differs from normal RVs in several ways. A standard size double bed across the back end (The Vixen 21 has a full bed in the back). A four-seat dinette is created by flipping the front passenger seat. A 600 watt Sharp microwave and a 1200 watt Heart inverter provides its 110 volt power from the coach's batteries when not connected to shore power. The coach batteries are charged by the inverter featuring a 50 amp, 3 step charging cycle. A four cubic foot Norcold refrigerator that operates either on 12 V DC or 110 V AC power. A Hi Fi AM/FM radio tape player that operates on 12 V DC. A Duo-therm 110 V AC ground powered air conditioner were offered as options. A 25 gallon fresh water tank under the front passenger seat. The Vixen TD does not use propane for anything; optional cooktops were alcohol powered while room heat is provided by a Webasto diesel powered coolant heater which also provides the heat exchanger water heater under the galley sink. An 18 gallon gray and a 12 gallon black water tank under the galley and bathroom floors outboard of the left side frame. Their dump connector and valves are behind the left rear body flap. The roof is hinged along the right side and is raised by a pneumatic strut powered by the rear level ride air compressor. Interior storage is four removable baskets and a wardrobe opposite the bathroom, below the galley and rear passenger seat. A small amount is available under the passenger bench seat and in the two dashboard glove boxes.

Its motor vehicle features are:

A welded steel frame and molded fiberglass body of unique design with a coefficient of drag < 0.3. All other vehicle elements are other manufactures products. It is rear wheel driven by a BMW 2.4 liter in-line 6 cylinder diesel with a Garret turbo. The engine is friction clutched to a Renault 5 speed manual transaxle. The front suspension, power steering, and power brakes are General Motors hardware. It has a Cadillac automatic level air ride system. The instrumentation is by VDO. Its 23 gallon fuel tank under the rear passenger seat, and its 27+ mile per gallon fuel efficiency give it a comfortable 600 mile range between fuel stops. The front hatch provides access to the engine powered heater/air conditioner by Harrison, the brake master cylinder is the GM Powermaster.  The front bonnet has some storage space and more is available in front of and above the rear wheels that is the full width (ski compartment)."

Now my goal is to flag down the next Vixen motorhome I see and get the first-hand story on the unit — maybe even get a peek inside. Are you a Vixen 21 motorhome owner? Ever owned one? Do you have photos or stories to share? Send us an email - [email protected]kpimedia.com.

We were thrilled to receive a scrapbook of RV memories from James Lawrence. We present his 40 years of RV reflections for your enjoyment. 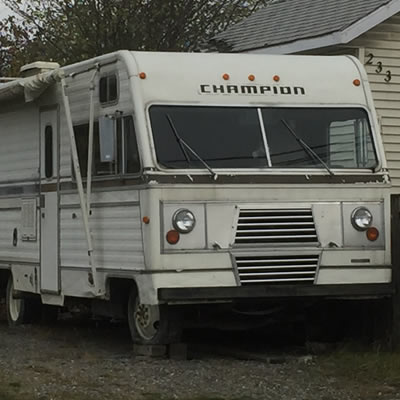