This classic unit is a show-and-shine favourite

Randy Welsh of Cochrane, Alberta is the proud owner of a 1979 GMC Frontier camper van, which has been in his family since it was purchased brand-new. Despite being a vintage unit, it still looks new and runs smoothly. Welsh takes his van to show-and-shines when possible, earning the admiration of other classic RV enthusiasts and connecting with like-minded individuals.

We wanted to know more, and Welsh was kind enough to answer our questions.

How did you acquire your Frontier camper van? Can you tell us a bit about some of the show-and-shines you've attended?

The show-and-shine club I belong to is the Cochrane Classic Car Club. We meet once a week on Thursdays and we go to venues around town, do parades, birthday parties, go to seniors lodges, etc. We also go to different show-and-shines outside of town like Cremona, Canmore, Calgary and others. I was invited to go to the Canmore GMC dealership for their 50th anniversary and it was a highlight for me.

What do you love about the vintage community?

Not too often do car clubs appreciate RVs, but the Cochrane Classic Car Club was happy to have me as a member and accept my 1979 Frontier van. It is really different and it draws a crowd.

What are your future plans?

The van is in showroom condition so no restorations will be needed but I will continue to take it to shows with the Cochrane Classic Car Club. Recently, Welsh had an unexpected visitor while camping in his unit:
“I was working in Deadwood, Alberta, on a farm. This was on my bucket list. At about 2 a.m. I was awakened by the van swaying a few times back and forth Then I heard some grunting. What a thing to wake up to. I peeked through the blinds to find myself nose-to-nose with a bear. His paws were on the van and he was standing up pushing on the van. I slowly grabbed my bear spray and air horn and eased into the front seat to see where he was going. The black bear was about 400 lbs and very large. He went to the house next to the van and pushed on their house door. He then came back to my van and walked past it on the other side and unplugged my electrical cord. I was worried he'd return but he didn't!” 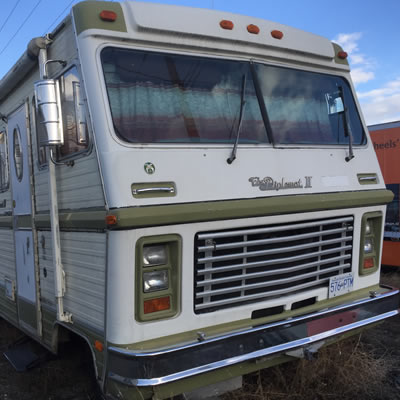 The Diplomat name first came on the market in the early 1970s under Executive Industries.

This clever RVer took on a challenging restoration project to give her family the best camping trips possible.