The trip of a lifetime from the Pacific to the Atlantic

George Tyre talks about the highlights of a trip across Canada

“The trip of a lifetime” is how George and Lolly Tyre described their well-planned adventure to the East Coast of Canada from Vancouver Island. The pair took months researching and scouting out routes, events and attractions before they left home, which helped make it memorable.

What were you travelling in?

We have a truck and fifth wheel so are very comfortable.

When were you away?

Where did you start your journey from and how long were you away?

We started from Vancouver Island and travelled as far east as Cape Spear, Newfoundland and Labrador, and returned through the United States. We were away from home for four months.

What were some of the highlights of your trip?

Where were you when the picture of Lolly was taken?

Did you enjoy the lobster?

Lolly really enjoyed the lobster; I am not a fan of lobster.

Did you try any other regional foods on your trip?

There were some interesting cod dishes in Newfoundland.

Where will your next RV adventure take you?

To Arizona for three months this winter. 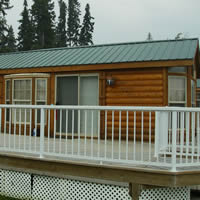 The Hamms and their cat, Domino, treasure Falcon Lake, Manitoba

Colette and Greg Hamm love to spend their summers camping at Falcon Lake, Manitoba, and recently starting taking their cat, Domino, with them.