Writer John R. Olson embarks on a road trip inspired by the book Travels with Charley by the late author John Steinbeck

In an attempt to recreate the late author’s trip through the United States—including using similar vehicles—Olson bought an American-made GMC pickup and camper. Steinbeck christened his truck and Wolverine camper Rocinante; Olson dubbed his rig Gabilan.

As we read in Down John's Road, Olson left his Seattle home in early September 2009 and travelled for 80 days, covering 34 states. His journalistic style of writing keeps the pace moving without a lot of lofty and artistic licensing; he prefers to stick with the facts and interesting personal interactions and insights. Olson stays in Wal-Mart parking lots, visits Steinbeck’s hometown, and travels to places mentioned in Steinbeck’s novel. In 1960, Steinbeck was looking for the real America populated with real Americans; Olson wanted to find the same.

And Olson succeeds. It is apparent that Olson has a way of making people feel comfortable around him almost immediately. They open up and tell their stories, sharing a moment in time that the author records in his book. You ride shotgun with Olson as he describes the passing landscapes, muses about his journey, makes notes comparing Steinbeck’s adventures and connects with a colourful mosaic of personalities.

Often, Olson steps out of his comfort zone—in situations most readers will identify with. Rather than shun a hitchhiker, Olson picks him up; rather than avoid what appears to be a wild homeless man, Olson engages him.; instead of quietly observing a young and obviously struggling couple, he shares a meal with them. Olson is rewarded for his efforts with snapshots of modern American life that are not too far from Steinbeck’s experiences more than 50 years ago.

You can feel your feet itching while reading. At the end you may want to buy a truck and camper or a coach and head out for your own adventure of discovery on the road—maybe not Down John’s Road, but your own. Then again, perhaps you prefer a comfortable sofa and this enjoyable read. 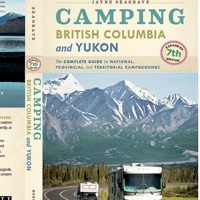 A guide book for camping in BC and the Yukon

Learn which campgrounds have interpretive programs, playgrounds, and safe swimming beaches; pick out parks with flush toilets, hot showers, and nearby restaurants; or find out which campgrounds are RV accessible. 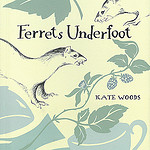 Life with an unusual pet

Ferrets Underfoot is the personal story of an artist who developed a passion for ferrets.