Stories in the talking stones

Ancient First Nations sites and relics across Alberta and Saskatchewan

If you love mysteries, gorgeous prairie landscapes and retracing history, I’ve got a book for you. Stone by Stone: Exploring Ancient Sites on the Canadian Plains by Liz Bryan is a travel guide to ancient native sites in Alberta and Saskatchewan. The bountiful and beautiful photos alone will get you packing up your RV and heading out. To top it off, Bryan offers detailed directions to find these sites.

The First Nations peoples of the prairies were nomadic buffalo hunters for over 12,000 years. Bryan describes places to see herds of these iconic prairie mammals and sites to rub your hands on ancient buffalo rubbing stones—where the animals scratched their insect bites.

The oldest and best-preserved buffalo jump site—where the buffalo were herded over high cliffs to their death—is Head-Smashed-In Buffalo Jump, located near Fort Macleod, Alberta, with its interpretative centre that mimics the buffalo jump itself.

Ancient campsites are marked by stones placed around firepits and stones chipped into tools and hunting spear points. Geologists analyze the rocks to determine from which ancient quarry they came, and this helps piece together ancient trade routes and travel patterns.

At Saskatchewan’s Grasslands National Park, visitors can see tipi rings, which are circles of rocks that were used to hold down buffalo-hide tipis. An estimated 12,000 tipi rings dot the park.

The medicine wheels of the North American plains are our version of Stonehenge and are as old or older than those English standing stones. “Of all the ancient stone configurations found in Canada, (medicine wheels) are perhaps the most enigmatic,” Bryan writes. Usually located on remote promontories, they could be related to ceremonies such as the Sun Dance or to calendars, boundary markers or navigational aids.

Bryan describes popular sites such as Alberta’s Writing-on-Stone Provincial Park but also provides directions to many less known sites. Visit the Wanuskewin Heritage Park in Saskatoon, Saskatchewan, and sleep in a tipi!

From petroglyphs and pottery shards to ribstones and rock effigies (is one a turtle?), the fascinating history of an epoch is recorded on the hills, cliffs and river valleys of Alberta and Saskatchewan—and in Bryan’s travel guide.

Visitors must be respectful as these sites are sacred to Canadian First Nations as well as to those of us who cherish the spirit of the land in all its plants, animals, waters, rocks and seasons.

This expanded version of Stone by Stone is published by Heritage House Publishing.

Near the hamlet of St. Victor is the largest concentration of rock art in southern Saskatchewan. Whereas most petroglyphs are carved into vertical faces of rock, the ones here were carved on the horizontal, flat-topped bluff of the Wood Mountain Plateau.

Figures and symbols include turtles, human handprints and grinning faces, and footprints of humans, bison, birds and grizzly bears. Some of the carvings are superimposed, implying they were carved at different times and certainly predating the coming of Europeans as there are no horses or guns depicted.

The slanting light of mornings or late evenings are best for viewing and photographing these mysteries. The artwork also shows up well in the rain and in floodlights in the dark.

The St. Victor Petroglyphs Provincial Park offers such night tours in the summer.

Rock art at Writing-on-Stone Provincial Park in Alberta is so abundant that author Liz Bryan called it “a ‘history book’ of the first Plains inhabitants.” There are more than 280 panels of both types of artwork. Pictographs are made with natural ochre or charcoal paints, and a painted thunderbird is one of the most famous pictographs at the site.

Entire scenes were carved into the sandstone cliffs above the Milk River, such as a combat tableaux and one interpreted as a horse-stealing event. 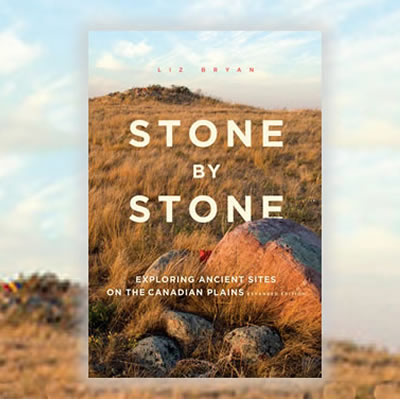 Stories in the talking stones

This book reveals the fascinating story of First Nations artifacts across the prairies of Alberta and Saskatchewan.

This guidebook packs a lot of information and visuals into a purse-sized package.
>