Adventure of a lifetime

Jeff and Janet Garcia sold their house and are on a two-year adventure to see national parks around North America.

Before Janet and Jeff Garcia embarked on a journey of a lifetime, they were living life by the book. They were high school sweethearts, married, had two kids, four-legged babies, solid career histories, two cars and a house in the suburbs. Before they left on a two-year journey in a 2013 Lance 22-foot travel trailer they call "Tex", they were focused on their two boys, Bryan, 23, and Christopher, 26, and doing the everyday things people do.

They had taken some trips while raising the kids. The boys were both Eagle Scouts, did a lot of camping and really enjoyed the outdoors. Visiting national parks across America was something they had always done, but they decided they wanted to see more of them, and all at once. So after their youngest graduated from college and got married, and both sons were gainfully employed in their fields, they decided to leave Austin, Texas, and take to the road.

The Garcias started their journey on June 1, 2014. Perfect timing, as 2014 marked the 50th anniversary of the Wilderness Act.

"We feel very strongly about the protection of outdoor space," said Janet. "We love to hike, ski, skydive, hike, bike and a lot of other outdoor activities. We've passed that on to our children as well, and so this was great timing for the trip."

They sold their house and off they went, into the unknown, just the two of them. Selling a house and leaving on a two-year adventure very understandably left Janet with mixed emotions.

"We had to sell our house in order to finance the trip," said Janet. "It was only the second house we'd owned in our lives and we raised the boys in that house the second half of their lives, so it was a very tough decision to make. Jeff was pushing for it more. I was kind of just along for the ride for awhile, but then I got fully on board. We sold the house, quit our jobs and we had no idea what was going to happen a year from now. It scared me a little to take almost two years off work."

Janet is a paralegal and her husband worked in retail management. It was daunting for her, thinking of what the job market will be like in when she gets back in two years. The question the Garcias get asked the most is how do they do it and how do they fund it.

"There's not really a complete answer," said Janet. "It's one of those things you really have to plan for, just like you have to plan for retirement and raise kids the right way so they can be independent adults. You have to make do with less material things. People can do it. You just have to figure out how, and it's not necessarily a monetary thing when it comes down to it."

When RVwest spoke with Janet in February 2015, the Garcias were on a break from their trip, back home at Janet's parents house in Austin. They had already visited 27 parks. Although they won't be able to visit every single one, they hope to see the majority of them. They've taken the RV to every park—except for the ones in Hawaii, which they flew to in December—and at the end of February they will fly to Florida. After that, they will once again journey on in their trailer, cover some East Coast parks, then fly to Spain in April with their youngest son to hike the El Camino. They will spend 31 days in total hiking and exploring.

"It's a pilgrimage of sorts," said Janet. "People do it for different reasons... we do it because of our love for the outdoors."

Then they'll be back to cover the rest of the parks on the West cCast. It's hard for Janet to pick a favourite place, but Glacier National Park, Banff National Park and Olympic National Park definitely come to mind. Along with the U.S. national parks, they also visited five parks in Canada.

"Glacier National Park in Montana and Banff National Park we enjoyed because they're very similar in regards to the glacial aspects of the parks," said Janet. "The features and the glacial lakes are quite similar. We hoped we would get up into Canada and when we got up north in the Rockies in Montana, we decided to go check out Banff. We had always wanted to go there. "

"Canadians burn a lot of firewood, " Janet said with a laugh. "We would be camping and people would pull cars or trucks over to the firewood pile and just be burning wood all day and all night. It's a lot different than the U.S. A lot of places we were at were more arid and more desert, so burning is not good. There's firewood bans a lot of the times in the parks and it's usually so hot you really don't need to do it."

When Janet and Jeff got to Kootenay National Park, it was so strange to them that there was hardly anyone there. It was not even close to as crowded as most American national parks or Banff.

"It was a little eerie and we wondered if it was safe," she said. "We kept thinking about horror movies and someone being out in the woods with a hatchet or something. But wow, it was quite beautiful and Canadians are so incredibly friendly. We liked being in spaces that were less crowded. A lot of people love Yellowstone and we did too, but it was very crowded."

"The biggest thing for me is the shower," said Janet. "We do a lot of dry camping because we are so limited with water, so shower usage is curtailed and also the space is so small and the pressure is horrible. We try to find campgrounds with showers, but you don't always find them. Jeff definitely misses hot water as well as a bigger kitchen, because he's the cook."

Janet and Jeff still have a long way to go and they're truly enjoying every minute of it, even without the comforts of home. RVing to them really is the freedom to go anywhere and follow your dreams. You can follow them on their blog at highwaysandblueskies.com.

Parks which the Garcias have already visited are noted in bold print. 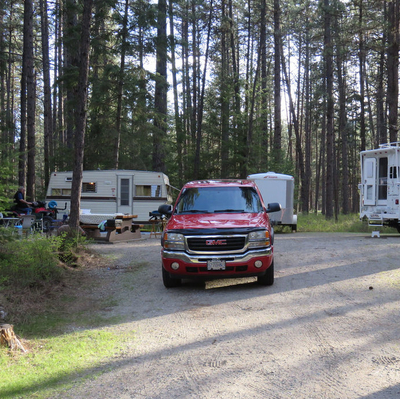 Bill and Marlene Carlson of Nelson, B.C. are taking their lovingly restored car and trailer to an RV rally in Saint Johns Newfoundland.