How to cross Canada the economic way: workamping

Travelling across Canada is on the bucket list of many a wannabe RVer.

“Someday,” some say. “When I’m retired. That’s when I’ll trek across the country.”

So what separates wishful thinkers from those who actually go out and do it?

“As simple as it sounds, just do it,” said Kate McCallum, RV blogger for Full Time Canada, along with her common-law partner Adam Doolittle. “We read a lot, researched a lot and even questioned ourselves a bit. But since we left, we couldn’t be happier.”

RVing across Canada wasn’t always something the couple set out to do. The notion of RVing full time came about after they were both laid off from their radio broadcasting jobs on the same day.

“We were done with radio and the dying industry that it has become,” McCallum said. “We needed to find something else. The idea stemmed from the fact that we both love travelling together and we thought it would be a unique thing to do while we were younger rather than older. Full-time RV living is usually something associated with people who are often retired. We didn’t want to wait for our retired years because there’s always the possibility you don’t reach those years. Plus, doing an adventure when you’re younger allows you to get out and do some more adventurous things that your body may not allow you to do when you’re older. When we discussed the idea, we realized it was 100 per cent for us.”

Prior to the trip, the Ontario natives had explored the Maritimes but never ventured west of their home province’s border.

“We’re so lucky to live in this amazing country that is large and full of changing landscapes,” McCallum said. “There’s so much to explore. We wanted to show others what the positives and challenges of full-time RVing are plus promote our wonderful country and some of the great things we saw along the way and document the process. This was part of our motivation to do the trip.”

McCallum and Doolittle had two furry companions along for their trip from the Atlantic to the Pacific. Chocolate lab dog, Bella, and calico cat, Paris Frances, hung out in the back seat of the truck during travel days with Bella resting on the seat and Paris Frances hiding out underneath.

“We were worried that the cat would mess throughout the trip but she never did,” said McCallum. “We think this is because we left her loose in the truck to wander if she wanted to and she wasn’t confined to a cat carrier. The days we travelled, we drove four to eight hours a day. Once we arrived, she went into the RV and used her cat box, if necessary.

“They were both awesome and always great to have around during our travels. They always brightened our day.”

Pay for your stay the Workamping way

To make the trip financially viable, McCallum and Doolittle opted to workamp. Workamping is offering services (usually 20 hours per week) in exchange for a full-hookup RV site.

“Do research and find out which campgrounds you’d be interested in workamping at and simply send them an email,” said McCallum. “A lot of them are open to the idea. Reach out long before a season starts to get a jump on some jobs that could be filled as the season approaches.”

McCallum and Doolittle started their cross-Canada adventure by workamping at an RV park on Prince Edward Island. From the east coast, they crossed Canada while chronicling their exploits on their blog, Full Time Canada.

“Travelling across Canada was an amazing experience,” said McCallum. “We took 36 days to do it and enjoyed some great spots along the way. We took time to enjoy Drumheller to check out the hoodoos and the other amazing scenery in that area. Jasper was also incredible. It snowed and we were able to enjoy the hot springs with the snow falling on us. We travelled with the RV in snow for the first time, which was fun and stunningly beautiful. We got up on the RV and brushed the snow off the entire RV before moving on.”

When the couple made it to the west coast, they found themselves on Vancouver Island in Tofino, B.C.

“We ended up being sucked in by the overall lifestyle in Tofino and haven’t left since our arrival,” McCallum said. “It’s stunning here.”

McCallum and Doolittle currently reside at Crystal Cove Beach Resort, where they’ve started up their own business, Tofino Food Tours. As such, their blogging has slowed down due to a busier schedule, but they still maintain it and are always looking for contributors who are willing to promote the RV lifestyle and travels around Canada.

“We were able to do all of this because of the change in our career and a positive mental attitude that this would be an adventure that we’d never forget,” said McCallum. “So far, it’s been just that.”

Here are McCallum’s 5 Helpful hints to know before you go RVing for the first time. 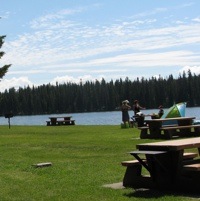 Volunteering with BC Parks and Parks Canada

Now is the time to apply for a volunteer host position with BC Parks or explore options at Parks Canada.

Carol Ann Quibell asks RVers what is important to them when they travel.