The proliferation of bright young brewers tackling the ancient art of fermenting grains all across Western Canada makes it worth seeking out top taps to taste various styles of beer. But with so many to choose from, how do you begin?

Stephen Bezan's business card reads “All beer stuffs.” Now that sounded like a good place to start, so I contacted him where he works at Sherbrooke Liquor in Edmonton, Alberta.

How to order beer

“Overall, beer is extremely diverse and there is always something for everyone," said Bezan. "There are dozens of styles and substyles: some are very light, quenching and easy-drinking, and some are immensely rich and flavourful and rival the complexity of fine wine and even spirits.

“Generally speaking, beer falls into one of two categories: lagers and ales. Within each of those categories, there's a huge range of different styles. Lagers can be very light and crisp like a standard domestic Adjunct Lager, or they can be massive, rich and flavourful like a traditional German Doppelbock.

“Ales too can range from refreshing Blonde Ales to thick and viscous Imperial Stouts aged in bourbon barrels and everything in-between. As a craft beer destination store, our two most popular styles of beer right now are IPA (India Pale Ale) and Sour Ales. Typically speaking, IPAs are the most ‘hop-forward’ of beer styles and often feature bright aromatics, intense flavours and pronounced bitterness from using more hops than other styles of beer. Sour Ales are brewed with wild yeast and/or bacteria cultures (Lactobacillus), which provide layers of complex flavours and tartness to the beer.”

Planning a flight of beers

Wayne Sheridan, founder of the Situation Brewing Company in the heart of Old Strathcona in Edmonton, explains how to approach a flight:

“A flight of beer really is a great way to get exposure to several of our brews without having to consume a full pour of each.  For us a flight is four, five-ounce pours. So the total volume is a full pint but the experience is more diverse. The choice of beers is completely up to the individual, and the servers and bartenders are only too happy to help pick. The beers are usually arranged and sampled in lightest (colour/body) to darkest.  If I were choosing, it would be:

“Choosing (what makes up your flight) is a really nice problem to have! Also, the thirsty connoisseur need not limit their selection to four styles as we sell each of the five-ounce pours individually. Our cask-of-the-day program brings a unique one-off style beer, conditioned in the serving vessel, or cask, for a natural carbonation. It’s literally tapped with hammer and spigot each day around 5 p.m. It’s always different and a great way to see what our imaginations have been up to.”

Take a tour, see the process

Sheridan said, “We really wanted to make more great beer in Edmonton for Edmontonians and show off how we do it. So, naturally we situated ourselves in the heart of Old Strathcona, Edmonton’s premier entertainment district. We like to show off the process and people behind the product.

“Most beer industry types, myself included, got really excited about making small batches of beer at home and dreamed of one day making a career out of our passion. It’s a humble and co-operative industry with the real payoff of being able to share our beer and brewing excitement. Whether it’s a flight of small-pours or a full pint, and whatever style … the only way to know if you’re doing it right is if you are enjoying it.”

Where to get started

If you are more comfortable with Bud or Kokanee, Bezan has this advice:

“First off, I would say take it slow. Bud, Kokanee and the like are all pale lagers, so I would start by seeking out locally made pale lagers and easier drinking styles like Blonde Ales and Kölsch-style beer. Jumping straight from an easy-drinking lager to a massive Double IPA or Wild Ale aged in apple-brandy barrels would be tough and may give the wrong impression of what craft beer can be.

“When you reach the point where you want to be more adventurous, do a little research. A quick Internet search of a specific style as you're drinking it will highlight attributes about the beer such as why does this beer have aromas of citrus, tropical fruit and pine trees (these are because of American-grown hop varieties) or why is this German Hefeweizen reminiscent of bananas, bubblegum and spice (this is because of the yeast variety used). Learning specifics about the beer styles will give you a richer appreciation of why they smell, taste and appear as they do, which will hopefully increase your enjoyment.

“Finally, go directly to the breweries or to specialized beer stores and talk to the people there. Oftentimes, you can sip on a beer and speak to the people who had a direct hand in making it. Making those personal connections and experiencing each unique personality of the different breweries really does go a long way and can further your education, and most importantly, the enjoyment and sense of adventure surrounding craft beer.”

So buckle up (not in the driver’s seat) and book yourself for a flight of new flavours at your local brewery and start making beer history of your own.

When the thought of cooking in sweltering hot weather is too unappealing, that’s when I turn to my favourite summer recipe—gazpacho.
by Tanya Laing Gahr 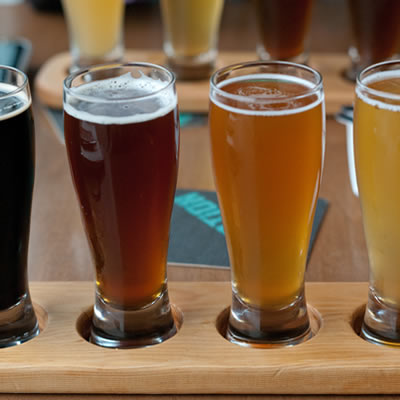 How to plan a beer flight without leaving the ground.