The secret to delicious seafood chowder

Northern pike make fine chowder—once the bones are out

1. Put pot of water on to boil for the corn.
2. Shuck the corn cobs and boil three minutes. Remove immediately from heat, drain and chill cobs in cold running water.
3. Dice mushrooms, peppers, celery, onions and potatoes and place in separate piles to be added to the pot in succession.
4. Cut corn kernels from the cob.
5. Preheat the Dutch oven. Add butter and oil. When a drop of water sizzles, add potatoes and stir well, cover, stir again in five minutes.
6. Add mushrooms and increase the heat to high.
7. Stir again at five minutes.
8. Reduce heat to medium and cook five more minutes. Add celery and stir well.
9. Add pike chunks, stir well and add red peppers, green onions. Cover and cook another three minutes on high.
10. Add the corn kernels and stir.
11. Sprinkle flour lightly over the ingredients while stirring.
12. Add milk and cream, stirring until everything is well combined.
13. Sprinkle with pepper and add a teaspoon of concentrated chicken stock. Stir well and taste. If the pot needs more concentrate, add up to three teaspoons of stock.
14. Simmer 10 more minutes and add salt to satisfy your guests’ taste buds.
15. Serve big bowls of chowder with fresh sourdough, biscuits or cornbread.

Any fresh fish, no matter if you caught it or bought it, can easily be substituted. You can even use cooked fish or leftover fried fish from a previous meal––just add that cooked fish at the end of the cooking.

A steaming bowl of fresh chowder is particularly gratifying when the weather is miserable, and a boatload of your crew is hunkered under the awning while the rain pours down. Chowder takes the edge off the disappointment of not being on the water . . . and reminds you of one of the reasons some of us fish.

Here’s how to turn fish into boneless fillets for chowder:

1. If you’re right-handed, place the whole fish on the cutting table tail to the right and top fin away from you.
2. Using a very sharp 6-inch (15-centimetre) fillet knife, cut immediately behind the gills down to the spine. Rotate the knife towards the tail and cut along the spine to remove the fillet. This will be tough going as you are cutting through bones.
3. Once the fillet is removed, turn the fillet skin side down and with tail towards you, slide the blade under the flesh next to the skin at a low angle to remove the skin from the fillet.
4. Turn the fillet skin side down. You will be able to feel the Y-bones sticking up above the lateral line. Gently make a cut above those bones just to touch the Y-bones and then up to the top of the fillet. This is what I call the loin.
5. Next, cut right through the fillet on the lateral line. Turn the fillet over and slide the blade along the bones to remove as much meat as possible.
6. Discard the Y-bones. Wash the fillets well under cold running water and proceed with your favourite recipe. 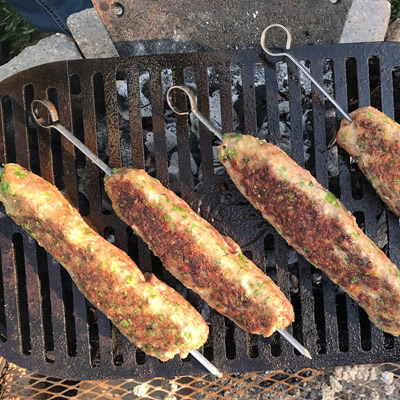 Once you know the secret, making perfect meatballs, skewers or burgers for the campfire is perfectly simple. 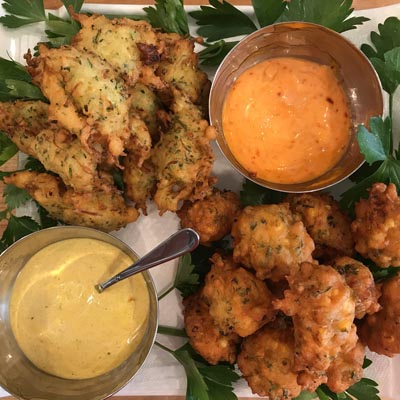 Fantastic fritters from the fairground of my childhood

Every time I make fritters, I ask why we don’t do this more often.