Things you need to know about medical insurance

You may get sick in the U.S.A. but your wallet doesn't have to suffer

Question: I have travel medical insurance but what happens if I get sick and need to see a doctor while I am in the U.S.A.?

This is not a simple answer, because each policy is different. For example: Bob blew out his shoulder. He went to see a doctor in California who recommended surgery. He contacted his family physician in Alberta who was going to arrange for the surgery. The insurance company paid for Bob's treatment in California (minus the deductible) and then sent him home to Alberta for treatment. They would not cover additional treatment in California because it now was considered a pre-existing condition, but other medical mishaps would be covered. If he returned to Alberta before his insurance expired, there was no refund on his policy. If he returned to the U.S.A. after the surgery, he would have to cover the cost of his trip and purchase another medical travel policy. His shoulder would not be covered because it would be considered a pre-existing condition.

Anna got quite ill with what they thought was the flu. The doctor gave her a prescription and she was feeling better. Her medical insurance covered the doctor and the medication (minus the deductible). A month later Anna had another attack. She went to the doctor again and was given a prescription. This time the insurance company would not cover her treatment because they considered it a pre-existing condition.

Frank woke up one morning with tremendous pain in his abdomen. He went to the ER department in a hospital in Arizona and was treated there. Unfortunately, the insurance company would not cover his treatment or prescriptions because his deductible was too high. Frank was able to get some compensation from Alberta health care and his Alberta Blue Cross coverage for the emergency care; doctors’ charges and medications. However, the compensation was far below the expenses.

The critical answer to this question is to read your policy carefully!

The ins and outs of RV clubs

There are many types of clubs for RVers—here are some of the most prominent ones. 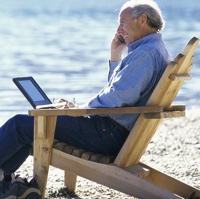 Keeping in touch is important for snowbirds. Here's how to choose a cellphone plan that will work for your travels.