After travelling through Tennessee and Georgia, the next leg of our journey led us to the Gulf Coast of Alabama. We stayed at the Rainbow Plantation Escapees Park near the city of Foley for nearly a month. The park has a beautiful setting—with living oak trees that grow along the roads and are dispersed between the spacious RV sites.

Foley is a shopper’s paradise with a multitude of factory outlets as well as Lambert’s—the Throwed Bun restaurant. Like the name suggests, they actually throw buns at you.

As far as we were concerned, the weather was great. Mind you, the TV was warning people to bring their animals inside because it might get down to “freezing”; however, the temperature hovered around mid-20s Celcius. Tough, eh?

The area around Foley is flat and has vast fields of growing crops (we found out that they were just harvesting the soybeans and peanuts and eventually, they would pick the cotton). The peanuts were the most fascinating; they grow underground like potatoes and the harvesters plow them out and leave them on top of the ground to air dry. Boiled peanuts are a popular snack for people in the area and they come in plain, salted, Cajun and garlic flavoured.

On our first outing we headed towards the water on the local backroads. The new houses that line the shore roads all sit on pillars about 10 feet off the ground and many of them are far from the cottages we expected. They are interspersed with rag-tag buildings—obviously suffering from the aftermath of Hurricane Katrina.

The community of Gulf Shores is located right at the water. Most of the older buildings in this community were either destroyed or badly damaged by the hurricane and they have been replaced with new high-rise apartment and condo complexes, resulting in a very modern feel.

A public beach that we found was absolutely empty. Although the temperature rose to 75°C that day, the locals claimed it was too cold to swim.

One thing Alabamians love is fishing, and they take it very seriously. Even the old docks attract fishers—both humans and birds. At the end of the wharf at Fairhope, we spotted a bunch of locals having a fishing tournament. Each had a special wagon with all their gear and conversed in their unique accent.

Other places of interest

We also visited the Naval Aviation Museum in Pensacola, Florida. It is vast and looked like it could cover about four football fields. Our guide was a naval veteran who had piloted some of the airplanes and had great stories to relate about the histories of the various planes and about his own experiences. The museum’s IMAX theatre was showing a film on hurricanes in general and Hurrican Katrina in particular. After watching it, we were surprised by the huge difference Katrina has made in the area.

Biloxi, Mississippi was only about an hour from where we were staying so we decided to check it out. The road to get there was suspended over one swampy area after another and people were parked and fishing along both sides. In town, there is still evidence of damaged/destroyed buildings, restaurants, houses and businesses. Replacement buildings sit 10 to 15 feet above the ground, presumably to protect them in case of another hurricane and flood. Mind you, Katrina brought in a 35-foot wall of water so one wonders.

As we headed west, the damage and destruction caused by Katrina was far more evident. The gal at the Biloxi Welcome Center spent more than an hour telling us about the storm, the destruction, the evacuation and the ongoing restorations.

At the time, they had just opened the new bridge leading to Biloxi. It replaces a draw-bridge that replaced the previous bridge, which had been taken out by another big storm.

Prior to Katrina, the casinos were only allowed offshore but now they are prominent throughout the city, giving Biloxi a totally different look and economic outlook.

After visiting Biloxi, it was time to move on and so we headed toward our next destination: Texas.

Working while you play: volunteer opportunities for snowbirds

If you go through proper channels, there are opportunities for volunteering in the U.S. 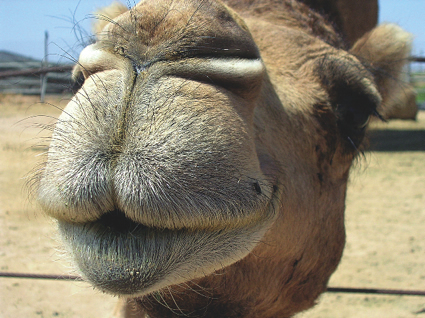 Yuma has many historical points of interests—but for something totally out of the ordinary, go explore the Saihati Camel Farm.