Casa Grande was our first stop in Arizona. One of the fascinating things about RV travelling is that you continually find other RVers you have met along the way. We stayed at the RoVer’s Roost Escapees RV Park, where we got together with folks we had spent time with earlier in Tennessee.

Close by was the Casa Grande Ruins National Monument, an ancient ruins site of the Hohokam that was first excavated in the late 1800s and became the first archeological reserve in the U.S. in 1892. The Hohokam culture was mostly a farming culture that was noted for developing extensive irrigation systems; it disappeared mysteriously after about 1,000 years.

It never ceases to amaze me how many different tribes or clans of ancient people have occupied the areas and how far back they date. There is in fact evidence of settlements as far back as 9000 BC.

At this particular ruins site, the Big House (Casa Grande)—which was built in the early 1300s—stands about 35 feet high. Windows align with the sun or moon at various significant times of the year and it is believed that the structure may have functioned as an observatory and calendar.

The vision of the ancient people building those magnificent structures and canals with no machines and living in the dwellings within the compounds is unbelievable.

Heading out from Yuma

We always seem to end up in Yuma. We’ve spent so much time around there that we actually know the streets of Yuma better than we know the streets in Lethbridge, Alberta, where we hang our Canadian hats. The major objective for stopping here this time (except to visit friends) was to take a trip down to Los Algodones, Mexico, so that my partner, Fred, could get new glasses (that he sorely needed).

Now, Algodones is a small Mexican border town south of California and just a few miles west of Yuma. I’m not sure how many streets there are, but each street has walkways that lead into plazas where you find cafés, pharmacies, dentists, optical places, doctors and vendors.

Algodones is where many winter visitors go for glasses, dental work and medical work and to have prescriptions filled. For many Americans, the cost of their health care, drugs and dental work is so high that a few trips down across the border is well worth it.

Vendors crowd every street selling jewellery, leathers, trinkets and whatever almost for free. Each vendor sells the best at the lowest prices. And small children will sell you day-old doughnuts as you wait in line to go through customs back into California.

In the town square, young Mexicans use canned spray paints and various pieces of plastic and paper to create the most incredible scenes on RV wheel covers, satellite dishes, vases, plates or even canvas—if you supply it. These young people are so talented and skilled—I’ve never seen anything like it anywhere else.

Depending on your timing, it can take up to an hour to travel the three miles from Highway 8 to the parking lot just on the American side of the U.S.A./Mexican border. From there you walk probably a block across the border. The return trip can be even more horrendous. We’ve seen line-ups almost a mile long to get back across the border. But the savings are worth it and I have not talked to anyone who was any more displeased with their treatment than they were at home.

Everyone gathers at Quartzsite

Our next stop was Quartzsite—best known for various shows like the RV show, the craft show and the rocks and gems show, as well as the huge swap meets. At the time we were visiting, the primary attractions are the annual bluegrass jam sessions and the Quartzsite community picnic.

Every year at the end of the winter season, bluegrass musicians gather at one of the 14-day Bureau of Land Management (BLM) visitor areas around Quartzsite and jam for four or five days. They park chuckwagon-style and each circle represents a different style of bluegrass music. Visitors like us grab our lawn chairs and wander from one site to another enjoying an eclectic array of offerings.

In late March, Quartzite people put on a community picnic at Cecelia’s Rainbow Garden—eight acres of desert donated by the BLM in memory of the daughter of the couple who migrated from Canada years ago and now run the local bookstore. It seems the whole community becomes involved. They sell plots and people create garden sites and memorials in whatever way they choose. People are encouraged to donate something live, so there are a lot of unusual cacti, trees and shrubs that don’t ordinarily grow there. Some of the flowers and cacti were just starting to bloom when we went out to a community picnic. All of the work is voluntary and people design, construct and care for their own sites. Interesting things happen in the desert.

Into the Wild West

Route 66 is not the smooth ribbon of highway we’ve been led to believe, but winds out and around the hills, especially between Kingman and Oatman. It’s definitely not a road to take your RV on, but we decided that we couldn’t leave southern Arizona without heading off to Oatman, so we ventured out in the car.

Oatman is an old mining town that sits in the hills of the famous Route 66 highway. Although it looks like some of the mines may be reopening, Oatman’s main claim to fame today is as a mining ghost town; here, gunfights are staged daily on the main street and burros wander up and down the street collecting carrots offered them by visitors. Burros are an honoured and protected species in the desert.

If you’re looking for different, interesting and reasonably priced crafts and souvenirs, check out Oatman.

Heading towards Canada and home, our next stop was Nevada. Yes, we did visit a casino or two, but our targets were the Canyon area and Zion National Park 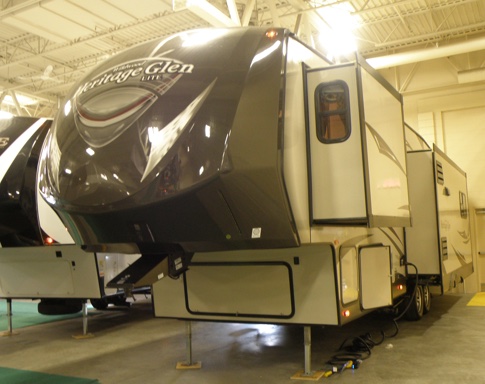 Find all the new trends models and trends at the Lethbridge RV show.

The history, archaeology, mix of cultures and people all contribute to making New Mexico a very special place. It is one of the most diverse and fascinating states in South-Western U.S.A.