All about organ pipe cacti

We were surprised to realize that the Ajo/Why, Arizona, area offers so many great sights and things to do. Our first outing was to the Organ Pipe Cactus National Monument. We’ve been there before. In fact we’ve been there several times before, but this time we decided to take the three-hour guided tour.

Organ Pipe Cactus National Monument is about 830 square kilometres and sits in the central part of the Sonoran Desert. The Sonoran Desert extends from the Mohave Desert in the middle of Arizona, into California and Mexico—encompassing much of the provinces of Sonora and Baja California.

A lesson in culture

Our guide, Nancy, was a gal who just happened to have a special interest in how the native people in this area (the Tono O’Odham or Desert People) gathered and grew their food in the desert.

She pointed out how the natives used the arroyos to plant seeds. An arroyo is a creek bed or wash that is dry most of the time, except during the heavy monsoon rains and the occasional flash flood that happens at other times of the year.

Her theory is that the native people gorged themselves when food was plentiful but starved when food was in short supply. It is also possible that their bodies adapted to these binging and starving cycles.

She went into a lot of detail about the various plants and their seeds; how and where the natives planted and gathered food; the fruit they gathered from the cacti and the nutritional and medicinal qualities of the plants.

A closer look at cacti

Nancy was also well versed in the different types of cacti (I have a hard time saying “cacti” and usually use “cactus”). Of course, she pointed out the organ pipe cactus and other different types: barrel, prickly pear, cholla, etc., and she explained to us so many of the features we had noticed but never learned about.

Most cacti begin their lives beside or underneath what they call a nurse plant. The nurse plant can be a mesquite or palo verde shrub or tree that gives the fledgling cactus shade and protection. The cacti have shallow root systems and eventually take most of the moisture and nutrition, thus overgrowing and killing their protectors. Mind you, this can take decades as cacti grow very slowly. I’ve heard estimates of 75 to 90 years before a saguaro will produce that first arm.

You never find the perfect cactus like they show in the movies. The saguaro, which is the most common, typically looks all rotted out around the bottom and has holes up and down the length of the spine where the cactus wrens nest. It can have arms going up or arms going down, twisted or straight, growing around the trunk at one level or scattered up and down.

Sometimes you find cacti with very unusual growth like the crescents that can develop on saguaro or organ pipe cacti.

The organ pipe has all its arms coming out from the bottom. I haven’t been able to find out what triggers the growth of the arms. One source I read said that the cacti tend to grow arms during a drought to have more surfaces to gather moisture—who knows?

Cacti are way more interesting than I have ever given them credit for. A life-time study? Maybe the next life.

The ins and outs of RV clubs

There are many types of clubs for RVers—here are some of the most prominent ones. 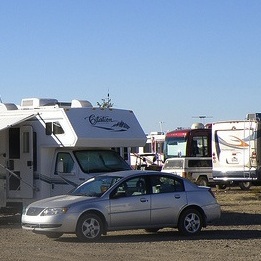 Talking safety and security for RVers

Newbie snowbirds often have questions about safety in RV parks and boondocking sites.