Like many RVers, we have spent our winters in a warmer, more amiable environment rather than the snowy, bundle-up city streets of Alberta. We called it “going to where they don’t sell snow shovels.”

Our first trip out was just that—we kept moving until we found a Walmart that did not sell snow shovels.

What happens when the Canadian dollar loses value and USA prices go up accordingly and we cross over into that “senior-senior” category for travel medical Insurance that severely impacts our life savings?
Not being in the upper socio-economic strata and determined not to spend our winter not travelling, we opted to head out to Vancouver Island where our provincial health care plan would cover us. (*Not all provincial plans are the same. Check it out for your province.)

Victoria must be a wonderful place to live but as a visitor, it is a difficult place to find your way around.

Bless the GPS. Mary voiced our last GPS. She did mislead us a few times. Jill is our ever-faithful voice of direction now and she does a wonderful job. We have only experienced one failure and that was because a road had been recently closed off. I am so glad she was with us.

We mostly beach strolled, people watched and ate in wonderful places—we had East Indian food, wonderful seafood and dim sum treats we haven’t had for years.

Vancouver Island in general, and the central part of the east coast of the island in particular, is reputed to be the most weather-friendly area to spend a Canadian winter and became the chosen destination for our good weather expedition.
Certainly not the dry sunshine we had become used to in our usual winter travels, but a reasonable amount of sunshine and a minimal amount of snow. Yes, Virginia, you cannot escape the precipitation but, as they say, “It’s rain—at least you don’t have to shovel it.”

We were not disappointed—It was glorious. So much to see, so much to do!

There were beaches to explore, huge cedar forests to investigate, and an array of quaint stores and restaurants to visit. The multitude of small islands between Vancouver Island and the mainland are home to many artists and eccentric personalities, most of them are willing to share their views and talents with outsiders.

Some trees are so big that hobbits could live in them. Other trees are so twisted and stunted they look like broccoli, reaching up from a mass of thick, wet moss. The vivid greens of the moss-covered soil, the ferns that arch up towards the overhanging layers of green vegetation and the impenetrable canopy that blocks out the light can only inspire the imagination.

There is a lesser travelled road called the Oceanside Route that wanders in and around the many settlements and villages along the shore.

French Creek is one of those places between Parksville and Qualicum Beach. It is where many of the fishing boats bring in their catch and where you take the walk-on ferry to Lasqueti Island (home to a small population of farmers and artisans).
We wandered down there to see the eagles when the herring were running. One cold and windy day, we checked into Rathtrevor Beach and just happened to see this brave and crazy fellow set up his para-sail and cruise into the icy water.

Historically the Salish people had inhabited the Qualicum Beach area for hundreds of years. The word Qualicum means "where the dog (chubb) salmon run" in the Pentlach language. It is considered to be within the traditional territory of the Qualicum First Nation.

Everywhere you look there are special manicured garden spots and invitations to beautify. The downtown is filled with specialty shops of all sizes and descriptions, along with coffee shops in almost every nook and cranny.

The storms on the West Coast are outstanding and late spring brings an incomparable opportunity to watch the whales migrate from the south to the northern Pacific Ocean.

Our last venture on the west side of the Island was the Wild Pacific Trail. Easy-going trails (the kind we like) wander through old growth as they hug the coastline of the Ulcuelet Peninsula.

As the trail's website says—“The Wild Pacific Trail is wide and leisurely with numerous viewpoints to the ocean and guides you in and out of the forest on a constantly interesting route.”

Couldn’t have said it better myself. 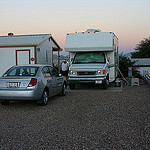 Full-timer challenge: living on a small pad in an RV park

There are plenty of options when it comes to where to park your RV. Choose the one that's best for you.

A checklist for going south

Here is a checklist for those things that often get overlooked when travelling south.