Some of the best trips happen on the spur of the moment, as RVers Shanon Armstrong and Ron Kesslar have found

Every May and September, before and after the regular camping crowds are rolling, Shanon Armstrong and her husband, Ron Kesslar, pack up their fifth wheel and head out for adventures unknown.They have one goal in mind: simply to enjoy the process. Unless the trip is a big one with an ultimate destination in mind, sometimes they aren’t even sure which way they’ll turn when they reach the highway from their home in Medicine Hat, Alberta.

“This last trip in September, we had talked about going along the Crowsnest Pass or heading up Highway 1 to Dinosaur Provincial Park,” said Armstrong, “but never really made a plan one way or the other. So when we headed out and came up to the highways where it was left for one and right for the other, I just thought (Ron) was turning right, and when he turned left instead, I didn’t even say anything. I just thought, 'OK, we’re going this way, I guess.' ”

The freedom to go where you fancy

The couple always enjoyed travelling in the spring and early autumn before their kids were in school, and once they retired they couldn’t wait to do some more shoulder-season camping. There are fewer crowds as well as lower rates for campsites and attractions. RVers rarely need a reservation prior to showing up at the campground gates in the off-season. For Armstrong and Kesslar, it’s a perfect combination that complements their fly-by-the-seat-of-the-pants-style trips.

Shoulder-season travel also makes it easier to stop and discover interesting sites along the way.

“There’s times where we go to a place and it looks likes a nothing town,” said Armstrong. “But we’ll stop in their visitors centre anyways, where we’ll learn about an old historic hotel that’s still around or a theatre that was the hub—or any number of other things that happened back in the old days.”

And there’s something about that kind of discovery and the opportunity to learn some history that push both Armstrong and Kesslar onward to the next little town.

“We get excited by the history we learn about,” Armstrong said with a laugh.

She writes about her travels in emails she sends to family and friends, which are then collected into blog format and posted online. Armstrong sometimes figures she may be overly enthusiastic about some of the sites they’ve seen.

“I’ll get some people responding to my emails saying they’ve just got to come and see what I’ve described, and I’ll start thinking, 'Oh-oh, this was exciting to us but it might not be as exciting to someone else,' ” said Armstrong. “But for us just to learn about the past and learn of the stories and see some of the old buildings and just to understand what happened in those places—whether it’s a an old gold mine or whatever—is something that we just love doing.”

Armstrong and Kesslar are adept at finding out exactly what they should see and do wherever they go.

“Mostly we’ll just stop in an area and start looking around for literature about it,” said Armstrong. “Ron is really good about picking up literature—whether it be in a visitors centre, a grocery store or even at a service station—and we’ll just go through it and if we see something that catches our interest, we’ll go check it out. We might even stay a day or two longer just to fully experience what the area has to offer.”

The couple said other campers can often be relied on to give some must-see tips. One time, a conversation with a fellow camper in Osoyoos, B.C., led Armstrong and Kesslar to head to southeastern Utah to visit Bryce and Zion canyons. And they’ve been to Alaska and explored the Oregon coast as well—all with only a rudimentary plan. Nothing is set in stone, even the distance they’ll travel each day.

“When we drove down to Iowa and Ohio to research both of our families’ histories, we had no campgrounds in mind at all,” said Armstrong. “We went armed with what cities and towns we wanted to visit and stay in, but we had no idea if there were any campgrounds there—and there weren’t a lot. So we found ourselves a few times driving around frantically looking for a place to stay. But we usually end our days pretty early—no later than 4 p.m.—so we’ve usually got plenty of time to look around.”

Counting kilometres is not the goal

Unlike many travellers, Kesslar and Armstrong don’t care too much about how far they go in a day.

“We’ve been known to travel even for only a half an hour before stopping and setting up camp again,” said Armstrong. “When we did the Oregon coast, there’s just so much to see there that we’d just go down half an hour, set up camp and travel 15 minutes on either side of us to check out all the lookouts and stuff.”

“There’s some places that you visit that you just don’t want to go more than an hour or two because there’s so much to see in the area,” he said. “One time when we were coming up through the States into Osoyoos, we went from the south side of Osyoos Lake to the town of Osooyos, which I think was only around seven kilometres.”

This year, the couple know they’ll be heading east to Saskatoon, Saskatchewan, to visit some friends. But from there? They may go left—or they may go right. They’ll know when they get there.

The benefits of shoulder-season touring

Travelling in spring and fall can offer RVers many benefits: 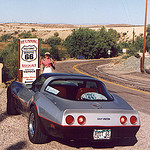 Canadian travellers get their kicks on historic Route 66

There's safety (and fun) in numbers for RVers from Canada and the U.S. who band together for caravan travel throughout Mexico's Baja peninsula.