All-in-all, between the two Spyders, the three had enough storage space for their personal belongings, their spacious tent, a small Coleman stove and other kitchen gear

One of the things I enjoy most about being a full-time RVer is that you meet tourists from all over Canada and the countries beyond. Then, having met them, the ingenuity with which many people approach their often long-distance treks never fails to astound me.

Such was the case a few days ago when, as I was leaving the RV park for an early-morning appointment, I saw two beautiful, low-slung and alien-like vehicles that looked ready to throw out an arm to devour anyone that walked by.
That time, I just marvelled at the beasts and kept going.

When they were still there the next morning and one of the owners was tidying up the picnic table, I couldn’t resist stopping to chat.

And that’s how I graduated from doing an interview in halting German with the Rollende Hotel tourists, to my pitiful attempts to understand Dutch for last month’s story about Holland’s Joost and Jai, through to trying out my sketchy high-school French on François, Murièlle and Jacques Guité.

In early July, with the objective of attending the annual Calgary Stampede and seeing some of British Columbia after that, the intrepid three had set out to cross Canada from their home in St. Charles Richelieu, Quebec.

Not on your life. In true explorer fashion, they decided to make the journey in two Bombardier-built, three-wheel 2014 RT-Ltd Spyders.

François and his wife, Murièlle, rode in on a gleaming bronze Spyder, while Jacques arrived on a creamy-white version. Both vehicles had similarly designed storage trailers in tow.

Once François had agreed to chat, we pored over the vehicles’ features and specifications.

“Even though they have three wheels,” he said, “these vehicles are very different than trikes.”

He went on to explain that, whereas a trike has one wheel in front and two at the back, the reverse is true of the Spyder.

“These have a lot more stability on the curves, which is important for safety reasons; all three wheels remain firmly on the road as you steer,” he said.

In a straight line—impossible of course—the distance from St. Charles Richelieu to West Vancouver would be over 5,000 kilometres.

The specs on the Guité’s two Spyders are as follows: three-cylinder 1,330-cc engines with six-speed transmissions. The fuel consumption rating is around 6.6 litres per 100 kilometres. At an average gas price of, say, $1/litre, that’s not bad economy for a cross-country trip with two people aboard, is it?

To top off their planning, François built in a small “refrigerator” box in the storage trailer that he connects to his vehicle’s battery for power.

“That keeps the essential items cool for about 12 hours,” he said.

All-in-all, between the two Spyders, the three had enough storage space for their clothes and other personal belongings, their spacious tent, a small Coleman stove and other kitchen gear; in other words, all an RVer really needs to travel from Quebec to British Columbia.

As for the trip itself, “The scenery was manifique, people were friendly and many said ‘Oh, wow!’ when they saw the Spyders," François said. "The vehicles gave us no trouble at all. The only time we had any sort of problem was when we came close to hitting a bear that ambled out onto the highway in Northern Ontario.”

Fortunately, the remainder of their trip was enjoyable and safe. They had a grand time in Calgary, walked safely across two suspension bridges—in Kelowna and North Vancouver—and thoroughly enjoyed their meal at the Keg Steakhouse on Vancouver’s Granville Island on their last night before setting out for home. 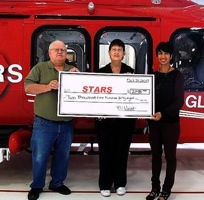 Hitting the road without a definite itinerary allows this Medicine Hat couple the opportunity to discover new and interesting sites.