Cycling across the States

As a fulltimer in an RV park, Elizabeth James enjoys listening to stories told by visitors who come and go throughout the year. Here is just one of them.

The bicycle is the most efficient machine ever created: Converting calories into gas, a bicycle gets the equivalent of 3,000 miles per gallon. —Bill Strickland, The Quotable Cyclist

If Bill Strickland is correct, Robert Williams used about a gallon of gas last year to cycle 3,000 miles from Portland, Oregon, to Holland, Michigan.

Not bad; but had Bob made it to his original destination in Maine, he might have run out of fuel. In fact, in an unplanned sort of way, that's exactly what he did—run out of gas, I mean.

But let's not get ahead of the story.

When a man has a 40-foot RV sitting in his California driveway and the three-wheel CanAm Spyder and camper he rode into a West Vancouver RV park, why would he set out on what should have been a 3,500 mile bicycle trip on the byways of America? As with so many adventurers, Bob's answer shrugged like, "Because I could."

Retired after 32 years as an electrical contractor, Bob lives in a small town 35 minutes northeast of Sacramento. Any British Columbian sitting under the sleet-clouds of November while leafing through Bob's Granite Bay photos might well ask why he'd ever want to leave home.

But as many cyclists will tell you, cycling is not just about exercise or getting from A to B. For Bob, who lost his wife to cancer in 2010, cycling offered the solution to re-setting his life for the road ahead.

"I was going to the gym or riding my bike in the morning, which was fine; but the rest of the day was empty," he said.

For most RVers, even those who carry the family bikes along, a 3,000-mile trip in a 40-footer might have been adventure enough. But Bob wanted to see the country on his bicycle.

"If you travel the highways, you don't see the scenery and you don't meet many people," he said.

By people Bob means the two octogenarian cyclists he met as they paused on their own trip to Seattle. Or the couple in Wisconsin who took him to their home to freshen up and then, unbelievably, left him to rest while they went to get supplies.

Yes, folks, that's a part of America we so rarely hear about; it really does still exist.

By scenery, Bob meant places like tiny Lowell, Idaho, Jackson Hole and Yellowstone and Grand Teton National Parks. Most of Yellowstone, home to a myriad of wildlife and to the largest number of geysers in the world, is in Wyoming, but it also reaches into Idaho and Montana.

"Sure, my two daughters worried," Bob said. "They gave me an iPhone before I left, with instructions to check in every day."

Now, if you're wondering why a journey meant to end in Maine stopped short in Michigan here's how Bob told the tale:

"You know how small town road signs aren't always clear as they could be for strangers?" he said. "Well, I was cycling along as usual in Wisconsin when, without any warning, the road changed into a freeway complete with on- and off-ramps.

"It's illegal for cyclists to ride the highway, so I turned to get back to the local road. Unfortunately, my bike caught a low curb; I came off, crashed hard and my helmet broke.

"Were you badly hurt?" I asked.

"I was hurting for sure and just laid there for a bit until some folks came over to help.

"Then, about two miles from where I crashed, a highway patrolman stopped to tell me he'd gotten reports I was lying in the road; let's say he wasn't impressed by my story."

When I suggested Bob's helmet was trying to tell him something, he agreed.

"About a week later, I reached Michigan but I was still hurting; it wasn't fun anymore."

Bob had run out of gas and decided to quit.

And that's how a tale about a visitor to the Capilano River RV Park and his $25,000, 997-cc Spyder trike and camper turned into a story about a man who plans to celebrate his 70th birthday by cycling from San Diego to Florida in 2016—another gallon of gas in the making. 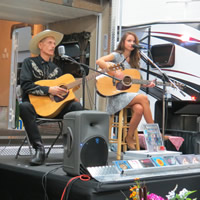 RVDA of Alberta is busy preparing for the Edmonton and Calgary shows, which take place in January and February. 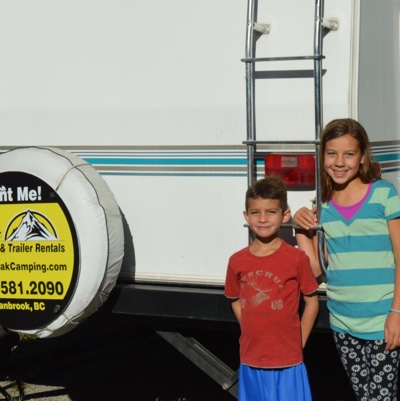 Luxury camping without owning an RV

After years of tenting, our family discovered the joys of luxury camping when we rented an RV for the weekend.