“Buttercup” is the name Ian Giles gave his Boler trailer. This August, he and Buttercup will join hundreds of other Boler owners in the RV equivalent of a pilgrimage to the birthplace of Boler––Winnipeg, Manitoba. The iconic Boler trailer debuted in Winnipeg in 1968. It is Buttercup’s 50th anniversary and Giles wants to do the party up right.

The event is open to all makes and models of moulded-fibreglass trailers, and the official celebration takes place August 15 to 19, 2018, at the Red River Exhibition Park in Winnipeg. But the event starts all over north America as Boler owners stage caravan launches and travel with fellow fibreglass-trailer fans to the anniversary celebration.

“It is a bit like a family reunion,” Giles said, “This is a family I want to be around.”

Bolers are a smooth-skinned fibreglass-constructed trailers, icons of Canadian camping for 50 years. Bolers are small, light and rustproof because of their glass fibre and resin construction. Of the estimated original 10,000 produced up until 1988, there are still plenty on the roads. Many owners have breathed fresh life into decades-old Bolers with lovingly executed remodeling. Bolers are hip. Their owners understand the value of travelling light.

“Welcome to the addiction,” Giles said. “You just fall in love with Bolers, and they are customizers . . .  they’re like a blank canvas.”

The walls of a Boler are thin and thus removing a set of cupboards is like removing a bearing wall in your house––you need to understand this before starting the renovation, Giles said. The project of remodeling his Boler took Giles four years to complete, and he was challenged to find good information. Even though Giles hasn’t twisted a wrench for pay in years, he is a journeyman mechanic and woodworking is his hobby.

Participants in the Boler anniversary event can join the casual convoy at any convenient point along the route. The map at www.myboler.com displays dots for each registered participant location, with participants from every province and territory in Canada and from 32 states . . . and counting. The trickle of trailers will converge into six separate streams to join at the confluence of the Red River Exhibition Park in Winnipeg. This will be the biggest fibreglass trailer event in history with room for 1,000 trailers.

Giles anticipates an epic Winnipeg traffic jam August 15 and is working with the local authorities to make traffic move smoothly.

The website maps show the six main travel routes from:

Stops are planned strategically along each route, based on about five hours of travel a day. The detailed list of stops shows an estimate of how many Boler owners will join the caravan at that particular spot.

When asked, “Why Boler?” Giles said, “The people. It really is the people.”

“I’m shocked at how many people have memories of camping in a Boler or where family members own a Boler,” said Giles, “They are memory makers.”

The first of the trailers attending the anniversary party are scheduled to arrive starting at 8 a.m.––local Bolers from Winnipeg and surrounding area. Then onto east, west and south caravans are each scheduled to arrive in their own slots right up until 3 p.m.

RVers know how to fend for themselves for food and drink, but Friday night is a hosted beef-on-a-bun dinner. A fleet of food trucks will be on site for self-service when campers want to take a break from kitchen duty.

There will be workshops and demonstrations on everything from cushion and curtain making and photography to trailer maintenance and gel coat repair (planned). Coffee and yoga daily at 9 a.m. will also be available. On Friday morning campers can learn to play the ukulele, and every night there is entertainment.

Register here, event tickets are available in advance only:  www.MyBoler.com

If you haven’t registered your Boler with the Boler owners group, you can do it here www.boler.ca.

www.boler-camping.com and www.Boler.ca for everything you wanted to know about buying and repairing a Boler trailer.

Bling for Bolers and other trailers and some hard to find parts: www.campingtreasures.com

Ron and Denise Samson are seasoned RVers and they are enjoying their first glimpse of the B.C. Rockies. 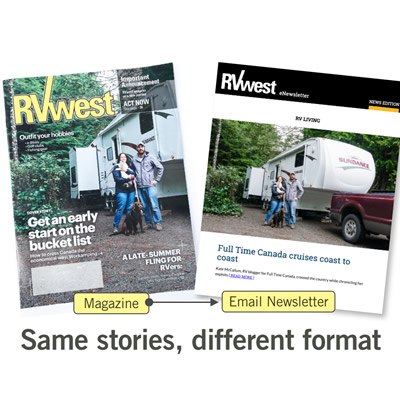 After 18 years of publishing, this is the final print edition of RVwest as we switch to digital delivery.
by Kerry Shellborn
>