ArrKann RV is 40 and going strong

To spend 40 years in one line of work takes a certain kind of dedication and conviction. And in an age plagued with indecisive, flippant and fleeting career decisions, the story of Alberta’s ArrKann RV centre stands out in its steadfastness. It’s a story of family, from the one who started the business to the thousands they have served over the last four decades.

When Ken Friedenberg’s father, owner of a small family-run hardware store in Edmonton, saw the death of such quaint stores in the face of a snarling and ravenous box store industry, he decided to get out of the business and semi-retire. In doing so, he opened a small, seasonal tent trailer rental business which would grow into the present day ArrKann Trailer & RV Centre.

That was in 1976 and now, 40 years later, Friedenberg is at the helm of the business which has two locations in Edmonton and one in Calgary with another one set to open there in 2017. They employ roughly 75 people, have more service technicians (20) than any other dealer in the province and continue to serve families with family.

Two of Friedenberg’s three children work in the Edmonton locations as well as his nephew who helps manage things in Calgary, and for the man who has dedicated his life to everything RV, this is what it’s all about.
“It’s a family-oriented and -supported lifestyle,” he said of RVing. “The guy right next to you [in the campground] is living the same dream so you have a lot in common to open doors and foster friendships.”

The irony of his life is that he has been so busy supplying others with the tools to enjoy their vacation or retirement that he hasn’t really had the opportunity to fully dive into the lifestyle he fosters and promotes.
“The guys who are in the RV business probably live it less than they should,” he said, “but I live that lifestyle with my kids as much as I can.”

There are some memories that come to him after a pause for thought.

“In 1976 my dad and mom packed us up and drove across Canada to Montreal for the Expo. I was 12 years old," Friedenberg said.

It was this journey and other shorter excursions, such as Sunday fishing trips to local lakes, that left him with a life-long passion for the quintessential elements of a life on the road.

“There’s no better way to get a good sleep than rain on the roof," he said. "The camaraderie that’s built around the campfire with no cell phones and no TVs.” Although he admits they now offer small tent trailers complete with solar power, satellite TV and Xboxes—“if that’s what you’re into.”

This year, along with the big anniversary for ArrKann, Friedenberg will celebrate his own 60th birthday and has started the passing of the business’ steering wheel on to the next generation. He hopes that as his workload begins to lighten, he and his wife, Brenda, will get a chance to join the flocks of snowbirds that he has helped leave the nest and hit the road. First up will be another cross-Canada road trip perhaps, with a truck and a fifth wheel, although he’s not totally set on a rig yet. After all, he certainly has a few models to choose from.

When asked about the future of the business, he said it is nothing but bright. Despite the recent recessions, ArrKann hasn’t felt the blow, an anomaly that Friendenberg attributes to their excellent customer service and referral-powered business plan.

“There’s no end in sight,” he said. “Only death, and I hope the business goes beyond mine, that’s for sure.”

As our conversation comes to a close, another memory from the past comes to Friedenberg.

“I remember one time when I took the kids out towards Parksville and camped for 10 days or so," he said. "We built sandcastles with the kids in the day and sat around the campfire at night. It was perfect.” 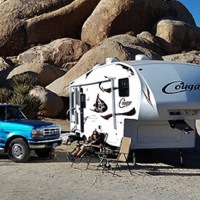 Full-time RVers Ray Burr and Ann McKinnell have earned their stripes as snowbirding adventurers. While traversing America’s perimeter and Canada’s Maritime provinces, the Victoria, B.C.-based couple has learned a thing or two about full-timing, and they offer tips for making the most of the RV lifestyle.

A Nanaimo couple took their [email protected] trailer across the northern U.S. to Winnipeg for a dog show and had all kinds of people ask about their teardrop-shaped trailer, including RVwest.