These cozy campers are a real conversation starter

If I had a dollar for every time someone in a campground spotted our Northwest Columbia Aliner and said: “What a cute camper—may we look inside?” I’d be a wealthier man.

More than 25 years after they went into production in Pennsylvania, the pyramid-like trailers that pop up easily on site then conveniently pack down for hauling can still prompt stares and curiosity. But, they belong squarely in the mass of other ultra-lightweight trailers that have hit the RV market in recent years as a more conservation-aware and economy-minded population head for the open road.

“The Aliner has continued to be a top seller, even when sales of the bigger trailers and fifth-wheels were down,” said Chris Swift, a salesman with Woody’s RV in Calgary. “Other ultra-lights have also been very strong sellers.”

Chris happens to be the helpful man who sold my wife, also named Chris, and me what was our first and only trailer in 2007. In our sixties and looking forward to retirement, we studied all kinds of lightweight trailers until we discovered the joys of the A-frame at an RV show in Calgary. Practised teams can set one up from the folded position in seven seconds, we were told; we can do ours in less than a minute.

Set for a journey

We were soon hooked, our new trailer hooked up, and our sights set on a two-month winter tour of the southwest U.S. And, even if some people insisted on calling our new home cute, we didn’t care.

It hardly made a dent in the fuel consumption of the 4-litre Ford Explorer SportTrac we use to pull it (a gas guzzler in itself, mind you), the bed was comfortable, it contained everything we needed (except for a toilet)—sink, stove, fridge, storage space—and it had a nice little furnace unit that saved our lives when temperatures dipped to well below freezing while camping at 8,000 feet in New Mexico.

Vital for me, at six foot four, I can stand up straight while cooking at the stove or dressing. Up to three people have slept in the unit; the table and the benches convert to another double bed—and four of us have comfortably sat around the table eating supper or playing cards.

With two subsequent trips to the U.S., explorations around Western Canada and, this past summer, an awesome but frame-rattling drive via the Dempster Highway to Inuvik in the Northwest Territories, our cuddly camper has covered about 40,000 kilometres, close to once around the earth.

The ticket to adventure

The frame is a bit rusty, a few screws have come loose, the fuse on the fan has broken off, the frame for the bench and the bed with their flimsy one-by-half-inch supports replaced with two-by-four lumber, a water pump handle has snapped off, and some wiring problems need fixing. Oh, and part of the hitch snapped off and had to be welded back after I shut down my brain and chose a “shortcut” in southern B.C. that took us over the rockiest and roughest terrain imaginable.

To us, though, Aliner still remains our beloved ticket to adventure. Check the bearings every two years, watch the tires, keep it clean and avoid the shortcuts—maybe it’ll stand up for another turn around the world.

As Chris from Woody’s noted, numerous lightweights are available in Canada. The more conventional Cruiser Fun Finder, or the Shadow Cruiser, weighing at least 1,000 pounds more than the 1,500-pound Aliner, still sell like hot cakes. As do the tear drop trailers, including those by EverGreen, that probably transcend the description cute. Forest River’s r.pod trailer attracts increasing interest with its 1950s retro look and, according to its website, “not a splinter of wood” in it.

Other A-frames abound, including what is likely Aliner’s biggest competitor, the Chalet. Then there are the Bolers; 10,000 were manufactured between 1968 and 1988.

And, because they’re locally made, I have to mention the Trillium Outbacks, neat little trailers manufactured in southeast Calgary at the rate of about 50 a year. They’re all custom-designed to purchasers’ specifications, as owner Joe Thoen, who launched the company 11 years ago, explained. And like the other ultra-lights, they don’t need a big truck to pull them.

Matching some of the particularly tiny tear-drop trailers is a baby sister to the Aliner called the Alite, weighing in at 450 pounds and liked by hunters, hauling them behind their quads through the woods.

Columbia Northwest goes back to the early 1970s, when company founder Ralph Tait originated the Aliner for friends and received orders from word of mouth. Although Ralph’s three sons now run the business, he can still be seen at the factory in Mount Pleasant, PA, at age 83. Prices in Calgary for the most popular Aliner models range from $17,000 to $19,000.

We can only add: Cute or not, eh, long live the diminutive pyramid. 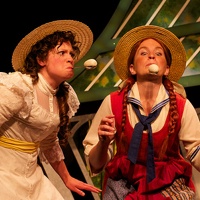 Brian Brawdy is a man on a mission. Over the course of his 12-month stint as a full-time RVer, he has appeared on TV 90 times, sharing his philosophies on green living and adventure.
by Joni Krats
>