Most sport movies are centered around football or baseball, but not golf. Only five golf movies are considered memorable: Happy Gilmour, Bobby Jones: Stroke of Genius, Caddyshack, The Legend of Bagger Vance and Tin Cup.

Tin Cup is a romantic comedy. Kevin Costner plays Roy McAvoy, a washed out, down and out, broke PGA golf pro from Salome, West Texas. Salome, (‘where she danced’) is really in Arizona. Roy owns a driving range, where he prefers to spend his time drinking with his good ol’ boys. When Dr. Molly Griswold (Rene Russo) begins golf lessons with Roy, he soon learns she is the girlfriend of David Simms (Don Johnson), a former college teammate and successful touring professional. In order to impress Molly, Roy convinces himself to qualify for and compete in the U.S. Open. Roy has to overcome his inner demons, stubbornness and self-destructive behavior to achieve his defining moment. Molly eventually becomes his therapist and lover, but can he win the U.S. Open?

The golf scenes in Tin Cup were shot largely on three golf courses: the Santa Rita Golf Course and the Tubac Golf Resort, both near Tucson in Arizona, and the Deerwood Golf Course in Texas. Here’s an overview of all three:

Located near the Santa Rita Mountains southeast of Tucson, this is not a high-end course. Only the first hole was used to film the scene where Roy hustles a fellow Texan out of his money by using a paddle and garden tools as golf clubs. The Santa Rita course was closed for three days for filming. Check out the Tin Cup Lounge. Some sources state that Longview, Texas, was the location of that tacky driving range, but the movie driving range was created near this golf course, with the Santa Rita Mountains clearly in the background.

This is one of the better golf resorts south of Tucson with 27 holes. Tubac received the 2011 Award for Excellence as a Golf Resort. When Tin Cup was made back in 1995, It took two days to shoot multiple scenes using the Rancho Course. When the script called for a water hazard on the 16th hole, where none existed, Warner Brothers built a small lake. This is the scene in the movie when Roy is the caddy for David Simms and gets upset when David does not "go for it" with only 230 yards to the green over water. Roy boasts he can make the shot and pulls it off, getting himself fired. At Tubac, the Tin Cup Lake with a commemorative plaque is really the fourth hole, 568 yards, par 5. In addition, the third tee of Rancho was used for the scene where Roy snaps all his clubs in two, forcing him to play the rest of the game with a seven iron. The Tubac restaurant was used in the scene when Roy and David bet on who could hit farthest with a seven iron. Roy loses.

Deerwood is one of five golf courses at Kingwood, Texas, north of Houston. In the movie, the U.S. Open is being played at Pine Hills in North Carolina. At Deerwood, the final golf scene takes place on the final hole or 72nd hole of the U.S. Open. This hole is really the fourth hole, 453 yards and a par 4. In the movie the final hole becomes a par 5. After a reasonable drive, Roy has 224 yards over water to the green. Common sense meant laying up short of the water, taking a bogey out of play, but Roy abandons common sense. Using a three metal, Roy puts his first ball in the water but continues to insist that he can make the shot. He hits four more balls into the water, finishing with 12 shots and losing the open. A plaque remains on the fairway.

This final golf scene is not very realistic, as hitting a ball into water is only one stroke with no loss of distance. Roy only had to take a drop by the water and could have saved par. In addition, a three metal has little to no backspin from 224 yards and the ball usually bounces forward. In making the movie, golf pros used wedges to create backspin, drawing the ball back into the water. This final golf scene was based on the real life experience of Gary McCord, when he took a 15 on one hole while on the Champions tour.

The movie has cameo performances by golfers Phil Mickelson, Craig Stadler, Johnny Miller, Peter Jacobson, Lee Janzen, Jim Nantz, Ken Venturi, Peter Kostis and Gary McCord, who all play themselves. Peter Kostis and Gary McCord  are CBS sports analysts who spent hours teaching Kevin Costner how to hit a ball properly. Some of the shots are really hit by Kevin Costner, while others are hit by local PGA professionals. Kevin Costner’s parents and son also appear in the movie, requesting but not getting David Simms’ autograph.

The next time you watch the movie, or if you’re fortunate enough to play the Tin Cup courses, you should have a different perspective. 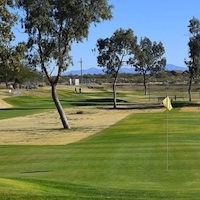 This luxurious Tucson resort was named mega park of the year by the Arizona Association of RV Parks and Campgrounds. 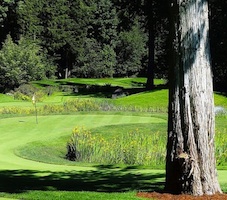 RVing and golfing at Cultus Lake

Just a short drive from Vancouver is the resort community of Cultus Lake, complete with two golf courses.