An afternoon at Myrtle Creek

Take an afternoon off from the casino

Snowbirds travelling along I-5 often stop at the Seven Feathers Casino and Resort in Canyonville, Oregon, about 25 miles south of Roseburg. The resort is a popular place to spend the night and play a round of golf.

This is a premier RV resort that consistently earns high ratings for its facilities, cleanliness and visual appeal. This park is so appealing that it just begs you to stop, for at least one night.  There are 191 fully serviced sites in this pet-friendly park, with free internet, cable television, laundry facilities, fitness centre, heated pool, hot pool—and the list goes on. I was impressed with the wide cement roads and pads, picnic tables, insulted water taps, 70-foot pull-throughs and manicured lawns between the sites.

The Umpqua Valley traditionally belonged to the Cow Creek Band of the Umpqua Tribe. In 1854, the federal government purchased 700 square miles of their land at three cents per acre, leaving the Umpqua landless and poor. The Oregon Donation Land Act of 1850 allowed settlers to move into the Cow Creek and South Umpqua River Valley, and the Umpqua paid the price of assimilation with disease, poverty and death.

It took Washington until 1982 to somewhat correct that 1854 mistake, when a settlement was made for $1.5 million. That was placed in an endowment and in 1993 was invested in a bingo hall in Canyonville. Originally there were seven families involved—along with the seven generations who came before them. They provided the leadership and inspiration to build the casino in 1994, the hotel in 1996, and the RV park ten years later.

This 18-hole “countryside golf course" is located 11 miles north of the casino. Myrtle Creek is also the name of the little town. The Seven Feathers Hotel offers special stay-and-play golfing packages, so check there first.

If playing up and down hills, hitting blind shots and playing out of blue-green sand bunkers is your game, this course is made for you. The coloured sand comes from a local nickel mine. The course plays from 4,900 yards to the back tees at 6,852 yards, with a difficult slope of 142. Built in 1997, the course has a Canadian connection, being designed by Graham Cook and Associates from Montreal.

There is nothing ordinary about this course, and the first hole quickly grabs your attention.  After the second hole, the course winds up the mountainside. There is a beautiful view of the Umpqua Valley and the Cascade Mountains from holes 5, 6 and 7. The signature hole is the 7th, with the fairway sloping down the mountain.

The back nine is very different than the front nine and plays a little easier. Following the 10th hole, the course levels out and runs along the valley and creek. The holes are wide open, with generous fairways, well-placed bunkers and a few water hazards.

“Forget the score and bring your camera,” said head pro Brian Sackett about the picturesque views along the course. With a 3.5/5 rating from Golf Digest Magazine, this unique course is certainly worth playing.

Seven Feathers has something for most everyone and caters to RVers. There are many options other than golf, from the casino to the amenities of the hotel, the quaint antique shops of Canyonville and many local wineries. 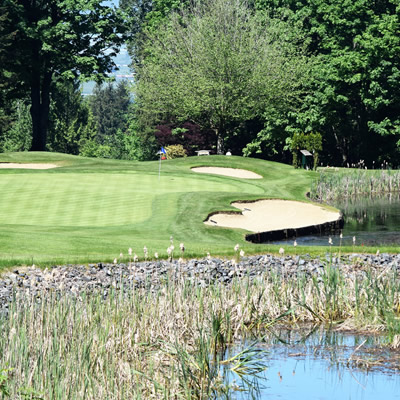 The Ledgeview Golf and Country Club in Abbotsford has produced some of the great names in Canadian golf.

The Turquoise Valley Golf Course features the fifth-longest hole in the United States and 10th-longest in the world, a 747-yard-long par 6.