After leaving Petersburg on the ferry we cruised through the Wrangell Narrows, which required the captain to make 46 changes of course. The narrows can only be navigated during high tide and in conditions with clear visibility, as the only safe course skirts close to shore. Even though we didn’t see any wildlife, the view was exciting and interesting.

While pulling of the ferry at Wrangell we bottomed out at the top of the ramp. Usually there was someone to check for clearance going on and off the ferries, but for some reason the person wasn’t paying attention. Rick also bottomed out with his trailer at the same spot; again, no spotter. Thankfully we were both going slow and no damage occurred.

We headed to our RV sites and got set up in spite of the sites being not only difficult to get into but not the most level. The upside was the setting for the RV park was picturesque and had a fantastic view of the ocean, along with phenomenal sunsets.

During our visit to Wrangell we walked through downtown and visited the Wrangell Museum, which is very well done, with great displays covering the history of the town including both the Russian influence and the Tlingit people. In addition, we took a two-and-a-half-hour tour of town checking out the highlights, which included Petroglyph Beach and Chief Shakes Island and Tribal House. While at the beach, we made rubbings of a couple of petroglyphs. We were told that nobody really knows why they were made or what their purpose was.

We went down to the ferry terminal to catch our next ride on the largest ferry in the fleet, the Columbia. It has a real dining room on board. While booking in we inquired about the problem we had with the ramp, only to be told it isn’t the terminal's responsibility to supply the necessary staff, but the ship's. That's something we’ll have to bring up when we get home. 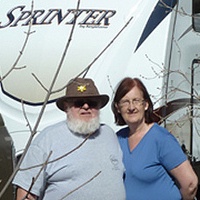 Preparations for our northern odyssey

The beginning of Duane and Lynda Pilson's northern adventure.