A Rock Fell on the Moon

A mysterious crime that came extraordinarily close to succeeding

Alicia Priest writes a true tale in A Rock Fell on the Moon of her own family going from being a cheerful, happy, loving family to falling apart in just a few short years. Alicia was 10 years old when the story unfolded in Elsa, Yukon. Her father Gerry Priest worked at a silver mine as an assayer for the United Keno Hill Mines. Her parents were devoted to each other and to their daughters. It seemed like a picture perfect family.

In August 1963, Gerry announced to the family that they would be leaving behind everything that Alicia and her older sister Vona knew and loved—and they would be leaving within a week. Alicia, her mother and sister found themselves in a cramped, dank East Vancouver basement suite, a far cry from the northern freedom and outdoors. For years Alicia and her sister never knew or understood why they moved so abruptly or why from that moment on their life was no longer carefree. Their father rarely made appearances, and if he did he was no longer the loving, supportive father they remembered but rather a brooding, angry man.

This story is written by Alicia as she finally pieces together the truth of her father’s involvement in the great Yukon silver ore heist at the United Keno Hill Mines. All through her childhood and beyond, Gerry proclaimed his innocence. Alicia went on a quest to find the truth.

Alicia talked to everyone who had anything to do with the case: police, lawyers, workmates, and others who lived in the town and remember her father and the crime. This book is a revelation about what she learned. It is an interesting read on a historic level, giving insight into life in a Yukon mining town in the 1950s and 1960s. When sprinkled with the Priest family experiences, it makes for a heart-wrenching yet fascinating tale.

To obtain a copy of the A Rock Fell on the Moon, go to harbourpublishing. 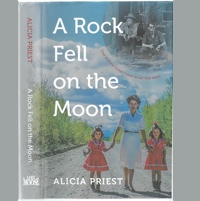 A Rock Fell on the Moon

In A Rock Fell on the Moon, Alicia Priest pieces together the full story of her father's infamous Great Yukon silver ore heist from the United Keno Hill Mines.

Discover the beauty and history of southwestern B.C.

Filled with pictures and maps, this book proves to be a journey in itself. It provides history and facts about locations within southwestern B.C.