The RV route to Everest

These international travellers took an RV journey to a surprising location

We had already driven through North America from California to Newfoundland, and taken our RV on a 99-day trip to Panama and back. We now wanted to drive to Mount Everest.

We rented a motorhome in Yunnan Province, (located in southern China, a couple hundred miles from Vietnam), and headed north. Thousands of rice paddies—some only a yard wide with little dykes trampled by generations of feet—stepped up the hillsides. We crossed sweeping valleys of soft sugar cane that made up a crazy patchwork of innumerable greens; each terrace marked with nodding sunflowers.

One afternoon, after hours of bone-jarring cobble roads under drooping bamboo, our driver’s cell phone rang. His ring tone was, “It’s a small, small world.”

When I saw wriggling larvae as big as my thumb for sale beside bananas and horse meat in the market, I was glad to be a vegetarian. But there were peanuts, fresh vegetables and fruits available as well. Walking way back to the rig I spied a couple of women scraping the skin off freshly boiled new potatoes. They smiled and waved at me to sit down on a six-inch stool between them. I was immediately rewarded with a hot potato and had found friends.

National Route 214 is a main interstate between Yunnan and Tibet, so we didn’t think it could be too difficult. Wrong! The motorhome wheels knocked rocks into cloud-filled canyons a thousand feet deep. The scenery was dramatic and worth every minute of anguish. We later learned that Lonely Planet and the official Chinese website described the road as “the most beautiful and most perilous in the world.”

The road was originally carved out of the mountains to accommodate Tibetan traders who wanted tea in exchange for their sturdy little horses. It is called the Tea-Horse route and later became part of the lower Silk. A horse would have been ideal; we had a motorhome.

For a week we climbed over passes and through valleys of the most varied terrain imaginable. At times furry fingers of bamboo penetrated the undergrowth on rocky cliffs that were too steep for crops, or we looked up at ghostly shadows of pine trees against a grey sky. At particularly perilous corners, faded prayer flags hung limp in the mist across the road or wrapped around boulders.

Above the tree line, the mountains were stark and bare where they brushed the pearl blue sky. Their colour varied from rust to grey to rich purple and then, where there was enough sediment for plants to take hold, they were tinged with green. It was as though God had not put enough green paint on his brush but instead concentrated on the richness of the blue heavens above.

Pilgrims have been coming to Tibet for 1,300 years. Now most of them fly, many ride the celebrated new train, a few drive and hundreds walk.

Two hundred and fifty miles east of Lhasa we came across the first group of pilgrims on their way to the Tibet’s holiest shrine; Jokhang Temple. The men and women had a block of wood strapped to each hand that they clapped together over their head, again in front of their chest and then hit the ground with them sliding forward until they were prostrate. They then walked to where their hands had been and repeated the cycle. It became a rhythm as the pilgrims covered the length of the road with bodies.

It takes an effort to climb the hundreds of steps to the Portola as the air is thin at 3,600 meters. The palace is a living complex with thousands of rooms and as many worshippers winding through a maze of narrow corridors. Pilgrims add yak butter to the flaming dishes in front of the statues and push bank notes through the grills protecting their favorite Buddha.

But we still had not reached Mount Everest, known locally as Qomolangma.

As we continued to climb the Himalayan foothills we were surrounded by bare hills with hardly an essence of grass. Shepherds with heads wrapped against the wind, sun and sand showed only dark sparkling eyes. Craggy grey peaks cast us into shadow in the middle of the day until we were suddenly faced with a range of snow covered mountains shining in the afternoon sun.

We had driven the RV as close to Mount Everest as possible so we pulled off the road and parked. As the sun sank it lit the great Qomolangma with a tinge of pink. We sat mesmerized. Within twenty minutes the sun had tanned us through our clothes, but then it was gone and we were suddenly cold.

We camped there alone at three miles high, on top of the world, looking at Everest through our motorhome window—eating noodles. 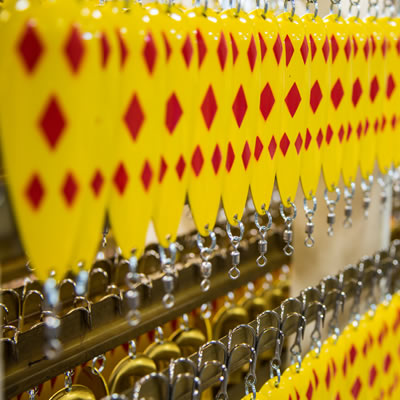 Len Thompson’s spoons are the Canadian iconic fishing lure, especially in prairie and Canadian Shield lakes. If you are after pike, walleye or brown, rainbow or lake trout, Len Thompson has a spoon that will hook you up. 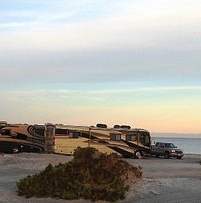 by Dan and Lisa Goy
>