The cowgirl way to RV

When Sandy Avery’s 25-year career in the insurance industry came to an abrupt end in 2013, she knew exactly what to do: hit the road to live out her lifelong dream of exploring Western Canada and the southwestern U.S. by horseback.

After selling her home and property in Water Valley, Alberta, Avery moved some of her belongings to a condo and packed the rest into her 28-foot Cimarron Horse Trailer with Living Quarters. With her dog and cat on board and one of her two horses in tow, she headed for Arizona.

“My brother and I owned a big house in Cave Creek, Arizona, at the time, and I just thought ‘I hate winters here’ and because I travel alone, I knew I wouldn’t be able to live this kind of lifestyle when I get into my 70s, so I just thought, now’s the time.”

Avery was a youthful 53 at the time, but travelling with a 1,050-pound animal is not easy. In addition to hauling hay for her horse, Avery must plan ahead to find equine campgrounds or bed and bales (which are similar to bed and breakfasts, but instead of ham and eggs in the morning, it’s hay and oats).

“Regular RV campgrounds won’t let you in with horses,” she said. “So you never hit the road and go, ‘Oh, I’m just going to find a campground along the way’ because they just aren’t there. I plan my trip according to where I can overnight with my horse.”

Like any other RV on the road, Avery’s trailer is equipped with a kitchen, bathroom and sleeping area in the front. In the back are three angled horse stalls. The rear stall is reserved for her horse, the middle stall is where she keeps hay and tack and the front stall is used as her porch.

Horseback riding in the Grand Canyon

The Internet is Avery’s best friend as she uses it to find places to stay, as well as remote, backcountry trails to ride. Over the past two winters, Avery has ridden numerous trails throughout Arizona and southwestern Utah, but her most memorable ride was the North Rim of the Grand Canyon on the North Kaibab Trail.

“It was the most frightening thing I’ve ever done with a horse,” she said.

The most difficult of the three maintained trails at Grand Canyon National Park, the North Kaibab Trail winds its way down into the canyon through Redwall Limestone cliffs and some of the hardest terrain you could guide a horse through.

“I went six miles down into the canyon to a place called Supai Tunnels,” she said. “I won’t do it again. I took my own horse down there and I’ll tell you right now, they don’t have any idea that if their foot goes off the edge, it’s a straight drop down and there's no scrambling to recover. And when you meet hikers on the trail, you have to go to the outside of the trail.”

The scenery, however, was incredible.

“It’s like nothing you’ve ever seen before,” said Avery. “There’s a reason it’s one of the top seven Natural Wonders (of the World).”

Avery has had other harrowing experiences—from her horse escaping for the day in Scipio, Utah, to crossing paths with rattlesnakes and an aggressive wild mustang stallion.

By mid-April, Avery returns to Canada where she spends the summers exploring B.C., Alberta and Saskatchewan. The Cypress Hills Interprovincial Park on the Alberta-Saskatchewan border is one of her favourite places.

“In the ice-age, it was actually a plateau, so there are all these big, rolling, grassy hills that are in the middle of the Saskatchewan plains. It’s really pretty. And they protect the natural grasslands, so for example, you cannot bring any kind of hay, weed-free or otherwise, into the horse camp. You have to feed grain and alfalfa cubes.”

The park is also home to the historic North West Mounted Police headquarters of Fort Walsh.

“I have an ancestor who was one of the North West Mounted Police so the day I spent touring Fort Walsh was extra special for me,” said Avery.

Loving every minute of it

Over the past two years, Avery has met many great people in her travels and she has established a solid network of friends and family. But when they’re not around, Avery isn’t lonely because right there beside her are three of her closest companions.

“I wake up every morning and I love the fact that I have my dog, horse and cat with me and I’m moving along and every day is a new adventure,” she said. “I really believe I’m living the dream here.”

And that’s good enough for this cowgirl. In the words of Winston Churchill, “No hour of life is lost that is spent in the saddle.” 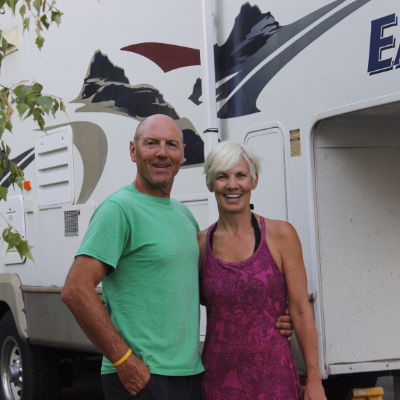 From orca encounters to illegal immigrants trying to hitch a ride, the Smiths have seemingly seen it all.

There’s no stopping this couple

Jeanette and Dennis Vieira decided that life is too short for wasted time—so they started RVing.