The urge to explore and learn about their world is a shared motivator for Franziska and Cliff Haberman of Cranbrook, B.C.

Switzerland native Franziska was on her second solo discover-the-world backpacking trip when she checked into a hostel in Vancouver, B.C., on November 30, 1989. There she met Cliff Haberman, a like-minded young man originally from Cranbrook, who shared her love of travel. Two weeks later, Cliff and Franziska left the dripping, dreary winterscape of Vancouver, heading south to Mexico in Cliff’s Volkswagen van.

RVing together as a couple and later with their two children has been a constant and a joy for the Habermans. For short trips they favour the Olympic Peninsula and points within the western U.S. and Canada. They also made an unforgettable return trip to Mexico, this time with their children.

“We had a fifth wheel and took the kids out of school for four months and went all the way down to Mexico and all through it,” said Franziska.

“We did 20,000 (kilometres) in greater Mexico, including Chiapas and Oaxaca,” said Cliff. “For us, travelling is the best education there is. You learn about the world. In school you deal only with your own age group and your own peers, but the world isn’t like that. There’s every age and every attitude and every culture out there.”

Franziska likens homeschooling the children during that trip to a Magic School Bus experience. Cliff believes that history is more relevant and memorable when you can stand in the place where it happened and that the best way to learn a language is to visit the country where it’s spoken.

“It was good for the children to have Christmas in a different country, to see how it is for the people there,” Franziska said. “It took quite a while to get into the rhythm of the country and the people, but at four months into our trip we were like a greased wheel. We all knew how everything works and we were having a good time, so it was really hard to come back.”

The entire Haberman family cherishes many memories, including climbing the Mexican pyramids, seeing the breathtaking mariposas—millions of monarch butterflies in their winter habitat—and savouring the wonderful coffee and gorgeous emerald waters of Veracruz.

There were some minor challenges during the trip, of course.

“The fifth wheel was a pretty small space for four people,” Franziska said, “but we managed to create private space with curtains for when someone needed some time alone. After we came home we started calling ourselves the Velcro Family—we were so used to living in a small space that we were still staying close to each other and not using the space we had in the house.

“(That trip) was the best thing we could ever do for our kids—I would recommend it to anyone. If you have the chance to take your kids out of school and travel as a family, it’s a really good thing to do. The kids still talk about it today, and we can’t wait to share some travel experiences with our grandchildren.”

These days the Habermans travel in a 27-foot 1967 Dodge Travco motorhome.

“When we first got this thing it was really, really rough,” said Cliff. “We blew the motor out completely at the top of the Snoqualmie pass. Our tow truck driver was kind enough to let us use his parking lot for four days while I found a used engine at a wrecker and put it into the Travco.”

Franziska still remembers the kindness of strangers in the small Washington town. “One gentleman realized that since we had no vehicle we must be running out of food, so he offered to take me grocery shopping.”

She said that after four days in the broken-down motorhome with no running water, they had lost their fight to maintain personal hygiene. For Cliff, who spent his days wrestling with a grime-encrusted second-hand engine, the situation was dire. Franziska found a solution: she went down the block and rented a room in a little motel.

“We were afraid that if they saw Cliff, they wouldn’t let him in,” she said, laughing at the memory. “So I smuggled him in.“

Cliff concealed his grubby self behind some shrubbery while Franziska went into the room and turned on the shower. When the coast was clear he bolted inside, being careful to touch nothing on his way to the blessed cascade of water.

The adventurous spirit runs deep in the Habermans. They relish their freedom so much that they do not reserve camping spots ahead of time. They stay in provincial and state parks whenever they can but appreciate being able to spend the odd night at a Flying J truck stop or Walmart parking lot when they need to. A stay at a private RV park is an occasional fun novelty.

“We’re not people who plan ahead for the next month,” said Franziska. “Each day, we don’t know where we’ll be that night, and that’s exciting. Right now, we know how each day is going to be, with getting up at a certain time and going to work and coming home and feeding the dogs and all the rest. Living moment to moment is really appealing.”

“If you’re on the road, you need to keep it simple,” said Cliff. “We started out with a Volkswagen van and this is our grown-up (version of that) Volkswagen. This is our retirement home.  We’re not retired yet, but when we do . . . ”

Franziska finished his sentence. “Yeah, when we do, this is going to be our retirement. We’ll be going full-time.” 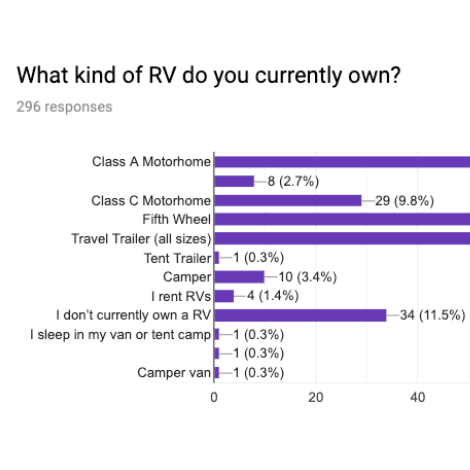 What to do when you lose your wallet

This snowbird was in Arizona when his wallet went missing. Here's how he handled it.