A new agreement signed in June 2014 by Canada and the United States allows information sharing between the two countries to ensure snowbirds don't overstay their welcome.

Gail Hunnisett, constituency assistant for Alex Atamanenko, MP for British Columbia Southern Interior, said regulations around residency and liability in regards to tax have been in place for years. But the new agreement now allows border officials to exchange specific passport information.

"This means they now have the ability to enforce residency regulations," said Hunnisett. "Previously, you stopped at the American border on your way into the U.S., so they knew when you came in. But when you crossed back you came to the Canadian border, so they had no idea how much time you spent there. Now border officials—not tax agencies—can request that information if they have reason to."

According to Hunnisett, many Canadians believe that if they spend fewer than 183 days per year in the U.S., they will both avoid U.S. taxation and retain their provincial healthcare. This is a common misconception. In fact, retirees who own second homes and/or spend the winter months in the southern states may have to submit forms to the Internal Revenue Service in order to maintain primary residence in Canada.

In 2014, Canada and the U.S. adopted the final phase of the Entry/Exit Initiative, which gives border officials in both countries the authority to share passport information. As of June 30, each day a Canadian spends in the U.S. is automatically recorded by the American Department of Homeland Security. Anyone remaining in the U.S. for an extended period of time, or who makes multiple trips every year, must be careful not to exceed the annual threshold of 120 days.

Canadians who spend longer may be subject to U.S. tax laws. In order to avoid liability for U.S. tax, individuals must file the Closer Connection Exemption Statement for Aliens (IRS Form 8840) with the U.S. Internal Revenue Service. This form acknowledges that you have exceeded the "substantial presence test" in the current year, but establishes your closer residency connection to Canada. Individuals who file the form each year by June 15 may remain in the U.S. for up to 182 days. The substantial presence test only applies to those present in the U.S. for more than 31 days in the current year. The test considers the total number of days in the U.S. over a three year period.

"I think it's important to look at who this is targeting and who is most likely to be affected by this," Hunnisett said. "This is for people with RVs or homes, often retirees, who go down to the U.S. for the winter. It's a common misconception they can stay down there for 182 days and the primary concern was to get back to Canada, specifically B.C., so they don't lose their medical coverage. But it's a little more involved than that."

People in the southern interior of B.C. often cross the border once or twice a week to fill their gas tanks, check mail if at a U.S. post office box or buy things on sale. They may only be in the country for a couple of hours—but this counts as a whole day.

"This is where people can get in trouble and why people need to know about this," said Hunnisett. "If they go down to the U.S. and spend five or six months there and they come back and haven't filed any forms, then they go to cross the border to buy gas or do some shopping, they may exceed their residency threshold and get into trouble. If they have not been filing form 8840, to establish their closer connection and their legal residence as Canada, they can be detained, penalized or prevented from re-entering the U.S. So there are some pretty heavy penalties associated with this."

Hunnisett said this can be scary, but the form itself is not onerous. It's perhaps a nuisance and just one more thing people have to do.

"Border officials can go back three years and look at how long you've been down there. There is a formula," she said. "You must keep careful track of your time. If you exceed 182 days in any year, and haven't filed a form, you will not be allowed to file a form and will be investigated, which nobody wants."

Hunnisett said it's important to understand that it's just like a tax form and you file it subsequent to the year. Forms are filed on June 15. If for 2014 you exceed 31 days, by June 2015 you have to file this form. This form is for each individual, so you cannot file as a couple or a family.

Hunnisett has some tips for people to make sure they aren't faced with an unwanted investigation.

Every time you cross the border, write down the date you entered, the date you came back and the purpose of your trip. Don't rely on memory, especially if you're asked about the previous three years. You don't want to trigger an investigation.

Individuals who travel to the U.S. on business, truck drivers who regularly cross the border, or people bringing their child to a dance recital need to ensure they tell the U.S. border officials it's not a personal holiday. Chances are they will be waved through and it won't add to the day count.

There are exemptions to the total day count. If you become ill or get into a car accident and can't get back across the border as planned, make sure you have documentation. You can subsequently file another form to get those days exempted from your final count. This may prevent you from being identified as a U.S. resident.

Take the IRS form 8840 with you whenever you cross the border. That way if you're asked about time spent in the U.S., you can reply with accuracy.

"I have spoken with our border officials, and they're not handing out information to U.S. border guards on a daily basis," Hunnisett said. "They're only giving this information when it's requested. So if people are keeping careful track of their time in the U.S. and not abusing the privilege, there shouldn't be any problem. Again, the form itself is not onerous, and it's better to be safe than sorry."

Happy with their lot in life 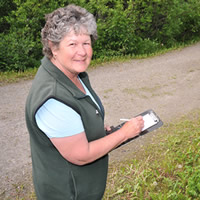 All in a day’s work

Optimism and a friendly disposition are some of the biggest assets for Rose Higgins as she manages the Barkerville campgrounds.