These first time RVers are hooked

Making the most of their first summer RVing

The Sonnenbergs —Dave, Tammy and their three children—bought their 35-foot Dutchman fifth-wheel in the fall of 2014 and this year was the first time they really got to try it out. They made up for lost time. They took a number of trips, for a total of nearly four weeks over the entire summer.

Early in the summer the Sonnenbergs headed off to Rolling Hills campground in central Alberta. As they were camped only seven minutes away from Kinbrook Island Provincial Park on Lake Newell, they would pack up their swimming gear, kayaks and other water equipment and hang out at Alberta’s largest man-made lake during the day.

The highlight of their summer though, was their repeated visits to Waterton Lake National Park. Tammy said that when she was younger she always loved the Crandell campground, but now that they are camping with children she prefers the townsite campground, as it has access to everything in and around the town by bike. Waterton has everything that their family loves to do.

“Our kids are super active, so they loved it,” Tammy said. “They were only in the trailer when it was pouring rain.”

The children braved the rather chilly waters of Waterton Lake to swim and kayak every day. The whole family explored many of the hiking spots that were at the children’s level. They hiked the Red Rock Canyon, over to Crandell Lake and around Cameron Lake. Tammy said her favourite hike with the children was the Bear’s Hump, as the kids could do the hike and the view was very rewarding for them when they got to the top.

“Other than hiking, bike riding was one of our favourite things,” said Tammy. “We could go from the townsite campground to anywhere. We would go to the hay barn and go to one of the big look-outs. Sometimes we saw bears along there.”

Tammy said they also saw a cow moose with her calf as well as a doe with her twin fawns, who would wander into their campground each evening.

A favourite activity of Dave's is to go on a moonlit bike ride. Once the kids went to bed, he would go out around 10 or 11 at night.

“He grew up there, so he is pretty comfortable on the roads and trails in Waterton,” said Tammy. “He will ride up in the dark to Red Rock Canyon, across over to Cameron Lake road, and then back down to Waterton.”

On one of his midnight rides he saw the northern lights and he got Tammy out of bed at 1:00 a.m. to watch with him. Together they took in the breathtaking experience of bright green lights dancing across the sky.

After their first season of camping with the kids, Tammy said the family is already making plans for next year. They would like to take a trip to Silverwood theme park in northern Idaho. B.C.'s Kikomun Creek Provincial Park is on the list, as well as a repeat trip to Waterton. 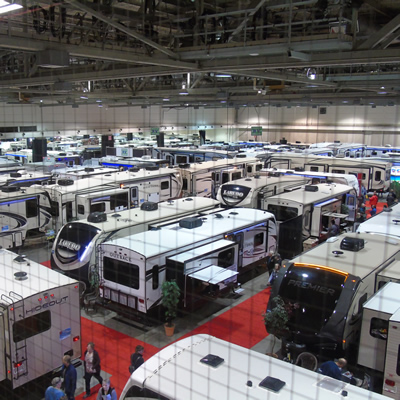 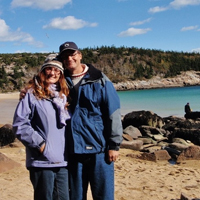 Tips for RVing full-time with your spouse

Ray Burr and Ann McKinnell have grown even closer while RVing, managing to cohabit in 180 square feet living space. Ray shares his tips on how they keep the peace.

by submitted by Ray Burr
>