Delve into the Thousand Palm Oasis

The Coachella Valley Preserve had many wonders in store

The early morning sun beat down; we were looking for forests of giant palm trees north of Highway 10 between Palm Springs and Indio, California. Up ahead we could see a group of palm trees looking out of place in the flat dry desert. We kept driving and spotted a parking lot by the side of the road; the sign read “The Coachella Valley Preserve.” It was a short walk to the preserve.

Once in the forest of the desert fan palms, the temperature dropped 10 degrees. The giant palms were in their natural state with huge skirts covering their trunks. These giants were 150 to 250 years old and were magnificent, standing straight and tall the as sun glinted off the green fronds. They were thriving in this dry barren desert of the Coachella Valley.

Nestled amongst the trunks of the trees was a visitor centre, an old log house with furniture and utensils dating back to the turn of the century. The centre was filled with old photographs and maps of the oasis. A self guided tour was encouraged and we wandered the trails marveling at the greatness of the trees.

The making of an oasis

The Coachella Preserve is 20,000 acres—17,000 acres make up the Thousand Palms Oasis, which is situated along one of the San Andreas Fault lines which run through the Coachella Valley. These fault lines stop water from flowing underground and push the water to the surface. Here, vegetation is lush and green, ponds are formed and an oasis is created.

Many species of birds live here such as sparrows, quail and wrens. The endangered fringe-toed lizard thrives in the dunes that are also formed by the fault lines. We took a walk along the wide trails and saw jackrabbits and many lizards. The lizards scurried as we passed, unseen until they moved.

The thick skirt of thatch on the palm trees is a perfect hideaway for many living creatures. I could only guess what lives underneath the dense growth such as spiders, snakes, rodents and bats. These cool places are a perfect refuge from the hot sun and predators.

We walked the trails from one grove of palms to the other, the change in temperature went from hot to cool, greenery to dried sagebrush and rock to sand. The extremes were evident and it was amazing what water can do in the desert.

As we drove away we noticed more stands of palms and the distinct line of the San Andreas Fault across the desert floor. We had found our forests of palm trees and they were in plain sight. 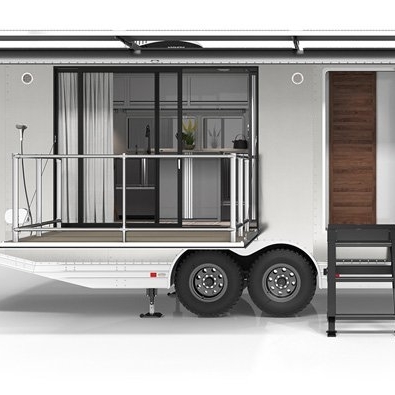 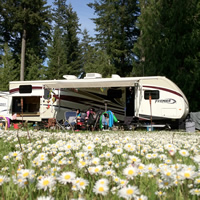 The Lynns wanted to make the most of their family vacations and RVing provided the answer.