Snowbirds must be aware of U.S. laws

Canadians may be considered U.S. residents for tax purposes

Snowbirds across the country are preparing their RVs for a trip towards the southern United States, where they will spend the winter in a warmer climate and enjoying everything that comes with it. The golf clubs and summer clothes are being brought out of the closet and packed into the RVs, passports are current and all the maintenance has probably been done ahead of time. So what’s next? Knowing the laws of the country you will be visiting.

Time limit in the U.S. without a visa

Currently, Canadians can spend up to 180 days in the United States within a 12-month period, but if they do stay that length of time are not allowed to take day trips across the border within that same period. The proposed American JOLT Act (Jobs Originated through Launching Travel) could change that rule and will affect Canadian retirees by increasing the allowable time up to 240 days without a visa. This will permit snowbirds to enjoy the warmer weather for a longer period of time. It sounds good and there are obviously positive aspects of it.

Negative implications of staying over 182 days in the U.S.

It is not known at this time if our medical systems will extend our current six-month time limit for being away from our home provinces. That could definitely affect the decision whether to stay longer or stick with the current 180-day limit.

Another serious aspect of this new legislation is the tax implications for Canadian visitors. Currently Canadians may be considered U.S. residents for tax purposes if they spend more than 182 days out of 365 days in the calendar year in the U.S. or more than 120 days per year on average over a three-year period. If you do stay that long you may have to pay U.S. income tax. To avoid this taxation it’s important to fill out the IRS form 8840 (Closer Connection Exemption Statement for Aliens) annually.  There’s a hefty fine if the form isn’t filled out, so it’s recommended that anyone considering a longer stay obtain legal and financial advice. It’s better to be prepared than face an unpleasant surprise at the end of the year.

Length of fifth-wheels in California: laws will be changing

On January 1, 2014, the state of California will have a new law that “brings clarity to the state’s vehicle code and will allow longer fifth-wheel travel trailers in the state,” according to a press release. The new legislation will permit fifth-wheel trailers up to 48 feet in overall length, provided the kingpin to rear axle length is 40 feet or less for a fifth-wheel with two or more axles. If there is only one axle, the kingpin to axle length may not exceed 38 feet. There is no clarification as to overall length of the RV and truck and if that will change from its currently allowed 65 feet. It’s recommended that Canadians should check prior to departure whether they will be legal pulling their larger fifth-wheels into California.

An example of a law that could have seriously affected Canadians is the one enacted in the state of Florida in 2012 that required an international driving permit for all foreign drivers, and this included Canadians. The good news is this law was repealed in April of 2013 and Canadians can once again drive legally in Florida with a valid Canadian driver’s licence. It would have had serious detrimental effects on the number of tourists who visit there each year, including Canadian snowbirds.

It’s so easy to become complacent and think the laws in the United States are similar to or the same as our Canadian laws and not concern ourselves about them before planning our trips south.  There are definitely differences and it’s important for Canadian snowbirds to remember that when visiting the U.S. we are visiting a foreign country. 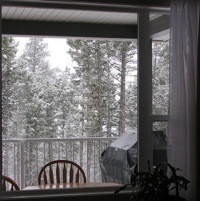 Is your house safe while you’re away?

Snowbirds must make preparations for leaving a house vacant.

Working on the road

Supplementing their income is a common practice amongst many full time RVers and the term “working on the road” is used to describe what they are doing.