The Mexican border crossing at Naco, Arizona, is a location made famous by Pancho Villa during the Mexican Revolution of 1910-20. Naco did not become a port of entry until 1897, when it opened in order to regulate the copper crossing the border. Today the border is protected by the Wall, which is made of steel 12 feet (four metres) high and extends five miles along the border. The major function of the steel fence, cameras and border patrol is to stop drug trafficking and illegal immigration. It is not the border, however, which attracts visitors to Naco, but the Turquoise Valley Golf Course and RV Park.

“We are only a tortilla toss away from the Mexican-U.S. border,” said general manager Pete Campbell of Turquoise Valley. “(Naco is) a small, peaceful border town.”

This golf course is Arizona’s oldest continuously operating course, originally opening in 1908.  The course was moved from near Bisbee to its present location in 1936 with the assistance of the Works Progress Administration, a project of Roosevelt’s New Deal. In 1996 two Canadians, Leslie and Peter Lawson, fell in love with the place, sold their sheep ranch in Alberta and took the golf course in a new direction.

Dick Atkinson, a teacher turned golf architect, was hired to renovate the course, and he added the new back nine in 1999. This is an open desert course, with bentgrass greens and hybrid Bermuda grass on the fairways. Trees line the fairways on the front nine, with open desert and shrubs on the back nine.

The course is bisected by the Green Bush Draw or creek, making it necessary to cross the wide creek twice. This arroyo was once the site of a prehistoric mastodon kill, but for golfers, Hole No. 11 over the creek is the killer. The hole is a downhill par 3, 199 yards from the back tees, and is the signature hole—with a great view of the Turquoise Valley and Mule Mountains. Hole No. 18, a par 4 at 353 yards, is back across the creek and called Win, Lose or Draw, as it is a good birdie hole. There are two par 4s, Holes 10 and 12, and these are risk-and-reward doglegs, allowing the big hitters to go for the green.

The most popular hole, however, is Hole No. 15, called the Rattler, and it’s a stroke of genius by architect Dick Atkinson. At 747 yards, it is the longest par 6 hole in Arizona. (Yes, there are actually courses with a par 6.) The hole is narrow and ends with a short iron over water to the green, while the golfer is usually hitting into a breeze. The entire hole is shaped like a long snake, with two snake-eye bunkers guarding the front of the green. The hole is a challenge and scoring a par leaves the golfer with the strange feeling of a bogey.

One of the local rules states that “a ball lying within a club length of a rattlesnake may be moved two club lengths without penalty and without disturbing the snake.” There is no mention of running in the opposite direction.

“The Rattler is unique and helps capture the entertainment dollar,” said Campbell.

For the record, two other courses claim to have the longest hole in the world. Gunsan Country Club in South Korea has a hole of 1,004 yards, par 7, while Meadow Farms in Virginia has one of 841 yards that is called a par 6 and is recognized by the Guinness Book of World Records.  The Rattler is tied for the fifth longest in the world at 747 yards. Believe me, that is long enough.

With the RV park just across the road, the RV golfer can walk to the first tee within minutes. There are 100 fully serviced sites within the park, with both back-in and pull-through sites. The facilities include 30/50 amps, cable, laundry, a recreation hall and washroom facilities, all approved by the Good Sam Club. The park is all gravel and can accommodate numerous sizes of rigs. During the winter months an activity director offers activities including games nights, live music, and arts and crafts sessions.
It is the golf course, however, that primarily attracts snowbirds. The pro shop offers Stay and Play packages and All Day Play and Dine Packages. The food at the Coyote Hideout has an authentic Mexican flavor and is very enjoyable.

Campbell provides leadership on and off the course. His newsletters and online articles reveal a golf course manager who genuinely cares about his customers. Campbell makes good use of social media such as Tripadvisor and Facebook to attract golfers and RVers.

As Naco is 90 miles south of Tucson with a population of only 1,200 people, Turquoise Valley  has to be innovative in order to compete. The Arizona Golf Association has praised the course for its playing conditions. Other accolades have followed from various magazines, but the proof of success is that the golf course flourishes and avid golfers continue to return year after year. 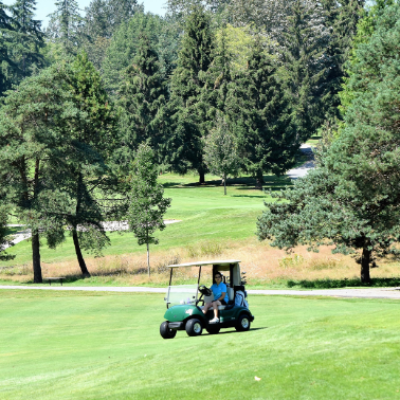 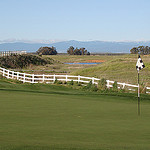