California is about to ban RV holding tank products with formaldehyde

CampCalNow Campground and RV Park Alliance is on the brink of securing passage of legislation to ban the use of RV holding tank products that contain formaldehyde and other chemicals in California.

The proposed legislation, SB 317, has already cleared therelevant committees and won unanimous approval from the California Senate. A vote in the State Assembly is expected in the coming weeks before the legislation is forward to Gov. Gavin Newsom for approval.

The legislation has very strong levels of support in California’s legislature. Additionally, the RV Industry Association (RVIA) recently agreed not to fight the legislation so long as the ban affecting chemical RV holding tank products was delayed for one year after the legislation takes effect, according to Debbie Sipe, CampCalNow’s soon-to-retire executive director who has spent years pushing for a statewide ban on chemically-based RV holding products.

California’s campground association has repeatedly fought to ban the use of formaldehyde in RV holding tank products in California, which the federal Environmental Protection Agency and the state Department of Toxic Substances Control have cited as a key cause of septic system failure, which can threaten groundwater supplies.

But the California association previously encountered stiff resistance from RVIA as well as Thetford Corp., a leading manufacturer of chemically-based RV holding tank products. In 2010, in fact, the California association sponsored legislation, Assembly Bill 1824, to ban the use of formaldehyde in RV holding tank products, as well as other non-biodegradable chemicals, including bronopol, dowicil, glutaraldehyde, paraformaldehyde and para-dicholorobynzene. Despite RVIA’s opposition, the legislation had bipartisan support from all but three Assembly members. However, it was vetoed by Governor Arnold Schwarzenegger, who was pushing for all chemical issues to be managed through his new Green Chemistry Initiative.

“The very serious threat that formaldehyde poses to the safety of California’s groundwater supplies is not going to go away until the state bans the use of holding tank products that contain this chemical and other non-biodegradable chemicals,” Sipe said. “What has changed now is that California’s 9 regional water boards have figured out the threat these chemicals pose. As a result, RV parks around the state are under fire to eliminate the products from their systems. State officials are aware of several California campgrounds that have experienced septic system failures that took place as a result of formaldehyde-laden waste being dumped into their systems over the past two decades,” Sipe said, adding that the costs of repairs to the septic systems and cleaning up the ground after septic system failures are considerable.

The U.S. Environmental Protection Agency issued a public warning 20 years ago about the dangers of using RV holding tank products with formaldehyde. “When chemicals, such as formaldehyde, are added to septic systems,” the EPA wrote, “they can cause bacteria in the system to die. When this happens, the septic system cannot treat waste effectively. Solids that are allowed to pass from the septic tank, due to inadequate or incomplete treatment, may clog the leach field. Furthermore, clogged systems may send inadequately treated sewage to the surface, threatening the health of people or pets who come into contact with it. Or it may percolate to groundwater, where the chemicals and untreated wastewater could contaminate nearby drinking water wells, rivers and streams.”

Here is a link to the EPA warning regarding RV holding tank products containing formaldehyde, which was issued by EPA’s Region 9 Ground Water Office in July of 1999: https://www.epa.gov/sites/production/files/2015-06/documents/rv-wastewater.pdf

The California Department of Toxic Substances Control issued a similar alert more than a decade ago, in January 2009, which urged consumers to “avoid purchasing and using any chemical toilet product that lists formaldehyde as an ingredient in any concentration.”

“It’s frustrating that a state like California, which likes to position itself as progressive and pro-environment, has been stuck in the Dark Ages for so long when it comes to protecting the public and our groundwater supplies from the dangers of formaldehyde and other chemicals,” Sipe said. “The problems associated with formaldehyde and other non-biodegradable chemicals used in RV holding tank products have been well documented in scientific research by state and federal agencies for decades. Australia banned the use of formaldehyde and other chemicals in RV holding tank products many years ago. Yet here we are again, fighting the same battle. But fortunately, this time around, the political climate has changed and we have very, very strong support for legislation banning chemically-based RV holding tank products.”

Based in Auburn, the CampCalNow Campground and RV Park Alliance is the trade group that represents campgrounds, RV parks and RV resorts in California. For more information, please visit www.Camp-California.com. 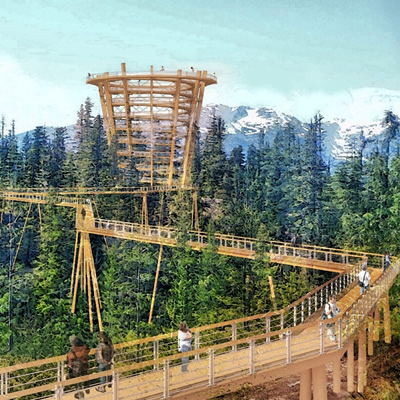 Iconic architecture, accessibility, and year-round attraction of world-class structure would continue to elevate Squamish as a must-visit tourist destination