A new Minister’s Tourism Engagement Council (MTEC), with a diverse membership to help guide government's tourism policy, strategy and program implementation, has been announced by Lisa Beare, Minister of Tourism, Arts and Culture. It will be made up of 28 representatives from around the province of B.C.

Four Kootenay Rockies representatives will be part of this newly formed Council:

Minister Beare made the announcement to media and tourism industry stakeholders prior to the first official gathering of the council.

“This council brings a fresh approach to tourism industry discussions in B.C., drawing on expertise from a wide range of sectors, across all tourism regions of the province, and giving arts, culture and sport a greater voice,” Beare said. “I’m excited to roll up my sleeves and get to work with this council, and I’d like to congratulate each of the members and thank them for volunteering their time. I know that working together, we’ll keep B.C. tourism growing.”

Here is some background information on the new Council:

As industry representatives from the provinces’ six tourism regions, the new council members will help government achieve sustainable tourism growth in the province by providing advice on policies, strategies and the issues that affect the industry, and helping to set tourism priorities, goals and strategy implementation.

Sheila Bouman, CEO of viaSport, has been named chair of the council. Glenn Mandziuk, CEO of the Thompson Okanagan Tourism Association, will serve as vice-chair.

“The new Minister’s Tourism Engagement Council is a great forum for members to provide advice to government on maintaining a competitive tourism industry,” said Walt Judas, CEO of the Tourism Industry Association of B.C. “Collaboration will lead to the adoption of best practices, which will make our industry even stronger.”

Council members represent small and large tourism businesses, marketing organizations, culture and sport groups, Indigenous communities, municipalities, technology companies, and wilderness guides, as well as many other sectors. The size – 28 members – and diversity of the council will ensure government receives timely information about emerging issues from every geographic region and every major tourism sector.

Members will serve for one- or two-year terms. The council is a volunteer commitment, but members will be reimbursed for travel to MTEC meetings, which will be held up to four times per year.

Janice Alpine – Ktunaxa Nation Council: Alpine is the business development officer for the Kootenay Aboriginal Business Society.
Rene Bourget – Three Valley Lake Chateau: Bourget is the manager of operations, marketing and sales at her family’s 180-bed resort west of Revelstoke.
Stephen Paccagnan – Panorama Resort: Paccagnan is the chief executive officer at Panorama Resort.
Tamara Verigin-Burk – Castlegar Chamber of Commerce: Verigin-Burk is a CEO with a background in non-profit business, tourism, economic development and social sectors.
Cathy Thicke – District of Tofino: Thicke is a councillor with the District of Tofino.
Sheila Bouman (chair) – viaSport: As chief executive officer of viaSport, Bouman is committed to working with partners across sport, health, education and community to champion change so that more British Columbians can thrive in sport.
Nancy Lee Arsenault – Tourism Café: Arsenault is managing partner and chief designer of the Tourism Café in Comox.
Claire Avison – Ministry of Tourism, Arts and Culture: Avison is the assistant deputy minister with the Ministry of Tourism, Arts and Culture.
Diane Bond – Okanagan Summer Festival:  Bond is the founder and managing director of the Okanagan Summer Festival Society.
Michelle Collens – Vancouver Sport Hosting: Collens is the director of sport hosting with the City of Vancouver, working closely with all levels of government, tourism, and community.
Ken Cretney – BC Pavilion Corporation: Cretney is the president and CEO of BC Pavilion Corporation (PavCo).
Chris de Eyre – Expedia: de Eyre manages Expedia's lodging partner services team for Western Canada, focusing on strategic consulting and revenue management for hotels.
Tracy Eyssens – Indigenous Tourism BC: Eyssens is the chief executive officer of Indigenous Tourism British Columbia.
Julie Fowler – Arts Wells Fest: Fowler is the executive and artistic director of the Island Mountain Arts Society in Wells.
Clint Fraser – Northern BC Tourism Association: As chief executive officer of the Northern BC Tourism Association, Fraser works with the board at Northern BC Tourism.
Matt Fraser – Airhouse Sports Academy: Fraser has more than 20 years of experience as a leader in the service and tourism sectors and is managing partner of Airhouse Sports Academy.
Brad Harrison – Adventure Tourism Coalition: Harrison is the executive director of the Backcountry Lodges of British Columbia Association and the owner/operator of Colwest Alpine Adventures.
John Hull – Thompson Rivers University: Hull is an associate professor at the faculty of adventure, culinary arts and tourism at Thompson Rivers University.
Walt Judas – Tourism Industry Association of BC: Judas has been involved in the tourism industry for over 25 years, and is CEO of the Tourism Industry Association of British Columbia.
Glenn Mandziuk (vice-chair) – Thompson Okanagan Tourism Association: Mandziuk is the chief executive officer of the Thompson Okanagan Tourism Region.
Katherine McRae – Commercial Bear Viewing Association: MacRae is the executive director of the Commercial Bear Viewing Association of British Columbia.
Don Monsour – Bon Appetit: Monsour is president of Bon Appetit Foods.
Sandra Oldfield – Tinhorn Creek Vineyards: Oldfield is the president of Elysian Projects Inc., a company that supports B.C.'s wine industry.
Breanne Quesnel – Spirit of the West Adventures: Quesnel is the owner/operator of Spirit of the West Adventures, a guided sea kayak tour company.
Stephen Smith – Crest Hotel and Pacific Inn: Smith is president and chief executive officer of several Prince Rupert hospitality-related businesses.
Beat Steiner – Bella Coola Heli Sports: Steiner is owner and chief executive officer of Bella Coola Heli Sports.
Marsha Walden – Destination British Columbia: Walden is president and CEO of Destination British Columbia.
Mark Werner – Guide Outfitters Association of British Columbia: Werner is the owner of Backcountry Guide Outfitters. 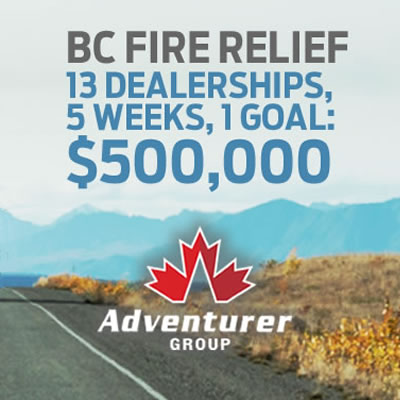 The Adventurer Group will continue to raise funds through their original deadline of September 30. 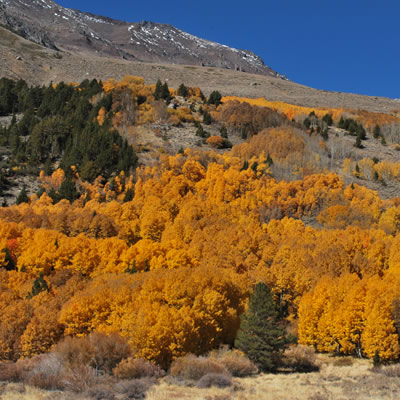 Camp-California.com highlights some of the best places to see fall colour

Some of the best places to enjoy fall's majesty and colour in the Eastern Sierra and Owens Valley, along with great campgrounds to use as base camps.