How we live and work in our RV

A series of unfortunate events several years ago left spouses Kari and Juan Bruno, ages 39 and 47, in dire straights with nearly nothing to their names. This prompted the two to make a decision against moving into a new apartment and instead purchase an RV for full-time living. Kari said that the whole situation really helped to put their lives into perspective.

“Everything out here is just so easy and simple,” she said. “What a lot of people don’t realize is how little you really need. We’ve just got the basics out here and we’re very happy.”

The couple lives just outside of Cranbrook, mostly around the Fort Steele area, though they sometimes venture up Mause Creek and Fish Creek. Typically, they will stay in one spot for a few weeks before packing up and moving on.

“We stay on Crown land, rather than in the RV parks,” said Kari. “When you’re in there, it’s almost like you’re packed in like sardines, all lined up. So we will stay in one place and then move on after either a few weeks or even if we just feel like changing things up.”

They can’t go anywhere too far from town, however, due to their respective jobs. Both Kari and Juan work at the hospital in Cranbrook, Kari as a laundry worker and housekeeper and Juan as a licensed practical nurse.

“Both of us are on call, so we have to be able to get back into town quickly,” said Kari.

In the wintertime, Kari and Juan park their RV and travel down to Uruguay in South America, Juan's homeland. While there, they stay in a quaint house that they are looking to purchase permanently.

“We take time off to spend about three to five months down there, and the rest of the year we’re up here working,” said Kari.

Aside from the initial cost of their 1994 Monaco La Palma RV, Kari and Juan don’t have a lot of monthly expenses. They have to take care of phones, gas and sanitation, but they get their main power from a set of solar panels on top of the RV.

“We also have a generator in case of backup,” said Kari. “But we almost never need it unless it’s been cloudy for three days straight.”

The couple has a cat named Chico, who is very friendly—albeit a tad odd.

“He likes to come with us on walks, just like a dog,” said Kari. “He doesn’t stray too far from the path because he’s partially blind and doesn’t want to get lost.”

Chico’s vision problem not only leaves him with an adorable cross-eyed expression, but is actually the reason Kari and Juan have him in the first place.

“Someone else was going to adopt him, but they brought him back to the SPCA after realizing that he was blind,” said Kari. “We got him when he was just a kitten and he’s been with us for three years.”

The comforts of home

Not only do they have a cat, but a garden as well—Kari has several potted tomato plants that she takes with her whenever they pack up their RV and move to a new spot.

“Last year I actually had pea plants as well,” said Kari. “They just add a little homey touch to wherever we end up.”

For Kari and Juan, RV living acts as a reminder to appreciate the little things in life and to remember to what is truly important to them.

“We don’t really need a lot, and we don’t spend a lot of time in the RV—it’s mainly just for sleeping,” said Kari. “We spend a lot of our time outside, just drinking coffee and enjoying nature. Sometimes time passes by so quickly just because of how beautiful it is out here. You look at the clock and the next thing you know, the day’s almost gone.” 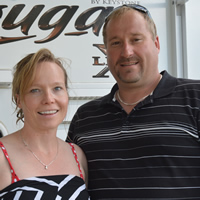 The Scholze family has a long tradition of summer visits to Fairmont Hot Springs Resort.