Tales of adventure and misadventure abound in Up the Lake, the first in the series detailing an American couple’s move to a coastal B.C. float cabin

For anyone with a yearning for adventure or escape, the idea of dropping off the grid holds an undeniable appeal. Wayne and Margy Lutz, pilots, Americans and education professionals, stumbled across float cabins on Powell Lake accidentally while on an extended layover during a camping trip through Powell River. Obviously people of action, the couple immediately began the process of securing a float cabin to call their own.

Wayne Lutz is also a writer, which is lucky for his readers who can discover coastal cabin life through his books. Up the Lake is the first in a series of Coastal British Columbia Stories. Wayne tells about the process of getting established in an off-grid cabin on the B.C. coast, seemingly a million miles removed from the couple's home in Los Angeles. The creative non-fiction is told with a sincere dose of humour. Wayne doesn’t hesitate to tell stories at his own expense, writing of “city folk” who are out of their element.

Nonetheless, it is clear from Wayne’s writing that the Lutzes are happy with their new-found paradise. Wayne explores the backcountry by boat and ATV and savours the quiet of the location. Margy establishes a floating garden and sets up a home on the lake.

Pivotal to the stories in Up the Lake is John, the man who built the couple’s cabin and is coming along for the ride whether the Lutzes like it or not. Fortunately, Wayne and Margy are thrilled to have someone show them the ropes and John quickly becomes a friend and mentor. Wayne has some lessons to learn as he travels alongside John, who always seems to be an unsung expert on every intricacy of floating life on the B.C. coast.

Whether he’s learning to use a chainsaw, trying not to sink his boat or savouring the starry sky away from the city lights, Wayne’s intriguing stories keep the reader engaged to the very end. The book also includes plenty of photographs and illustrative maps. Up the Lake and other Coastal British Columbia Stories are available on Amazon, either in print or for e-readers. You can also follow along on Margy’s blog about life in a float cabin.

Coming soon: a review of Off the Grid 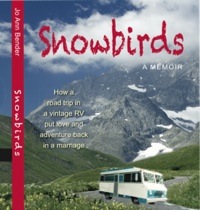 Memoirs of a snowbird

Jo Ann Bender takes you with her on a snowbird's adventure from northern Washington State to Texas.