The Boss and his wooden caravan

It was the early 1920s. No one used the term “RV” and the Tin Can Tourists, a club based around car camping, had only just formed in the United States. Nonetheless The Boss, an innovative Scottish tradesman, decided to build his family a wooden travel trailer. Over the next few years he went on to modify it into a full caravan.

In 1929 The Boss took his caravan to the World Fair in Newcastle, England, where he was told that a wooden caravan would never last. Today his grandson, Stefan Sykut, remembers travelling through Scotland in the homemade caravan until he left Scotland for Canada in 1964.

“He was a very clever sucker, a different guy,” said Sykut of his grandfather, Stephen Lawson Wallace. “Everybody called him The Boss, even his family.”

The van, as it was generally called, slept eight. Holidays were family affairs with Sykut, his cousins and their mothers going along. The van had a burnished copper water tank and gas lamps. The beds folded out and there was a stove and oven inside, as well as a toilet. Made of polished wood in the interior, Sykut remembers it as a cabin on wheels.

Every year the caravan would take the family on holiday for several weeks. Often the children would go trekking in the hills or sing songs around the campfire. Being that it was Scotland, there were always rainy days to sit around playing Ludo or Snakes and Ladders. The caravan took the family all around the countryside from the Isle of Skye to the Braemar Highland Games. Early on in its travels the caravan even passed the Queen Mother’s entourage on the road and she stopped and asked to take a look at it.

“We never saw anything else like it,” said Sykut of the van, “but The Boss was friendly with gypsy-type people. There were fairs and they ran the sideshows. There was a big family called the Codonas and they had custom-built caravans that they lived in, but they were sheet metal. The glass was all cut glass with beautiful designs like roses and flowers down the edge . . . They’d always come and ask, ‘Can we see through your van, mister?’ Then they took him back to show him theirs.”

When a Codona died his van was burned so that the extended family wouldn’t fight over it. It’s an idea The Boss adopted so, in the early 1970s, the unique wooden caravan was burned. Sykut had always known what the fate of his grandfather’s cabin on wheels was going to be. By this point Sykut had married his wife, Sharone O’Brien, and started a family of his own. He was ready to let his camping experiences turn to memories.

O’Brien, however, wanted to make some camping memories of their own. It took a few years for everything to work out; the kids grew up, careers fell into place and Sykut eventually came across a hardy little camper that caught his eye. The couple haven’t looked back since. Today they own a motorhome that they drive to Yuma, Arizona, annually to spend the winter in their park model. In the summers, O’Brien and Sykut camp in Western Canada, often with their grandkids.

“This is what retirement can be,” said O’Brien. “We have a great life. Really, there’s absolutely no downside.”

For the couple, RVing simply allows them to enjoy economical travel at this point in their lives. They don’t consider their winters in Yuma to be a holiday—just winter living. They enjoy the park community, Skyping with their grandkids, buzzing around on their scooter and just taking in the desert atmosphere.

“There’s an orange tree out back (behind our mobile) and the smell is just wonderful,” said Sykut. “There’s a severity to life in the mountains; there’s a harshness, don’t kid yourself. It’s tough. (In Arizona) there’s a softness—the smells and the air. When the wind blows there’s a soft easiness to it.”

Yuma may be a contrast to British Columbia, but it’s even farther removed from the heather and weather of Scotland. For Sykut, stopping at a farm for buckets of fresh milk or fording a creek in a homemade caravan might be merely recollections of a childhood experience. But perhaps he inherited his ongoing adventurous love for life from the man they called The Boss.

Leanne Tucker invested in a class C motorhome to take her dogs to championship trials in the U.S. 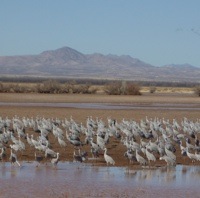