Elvis has left the country

Ladies and gentleman: Elvis is alive and well and touring Canada in a rented RV. You’ll recognize the man himself by his trademark pompadour, his hip swagger and his crafty—and convincing—English accent.

In actuality, Derek Russell—with the help of his wife Christine and more than 20 close friends acting as musicians, singers and road crew—has been shaking his booty king-style since the couple’s 25th wedding anniversary, and because the combined efforts have raised a substantial amount of money for charities benefitting children, they’ve received a royal command to join the Queen of England for tea.

Derek and Christine, who have been married for almost 40 years, live in a little rural village in Norfolk in the East of England, the same village where Christine was born. Derek was born in the next village over and Christine said they’ve known each other all of their lives. Their first date, unsurprisingly, involved the song stylings of Elvis Presley. Elvis, it turns out, would become the featured artist in the soundtrack of the Russells’ lives together.

Derek drives a lorry—a semi, in North American parlance—and Christine describes herself as a “dogsbody,” keeping the books, taking calls and organizing shows.

Derek’s first performance took place on the evening of the couple’s 25th anniversary. While planning a party in the village’s community centre, Christine saw an Elvis impersonator on television and thought he would be the ideal addition to the party. Christine managed to contact the artist, who agreed to perform for the celebration. Derek, however, had other well-laid plans.

“We always go out as a couple,” said Christine. “He’s not one to go out to the pub and he’s not interested in sport. He said, ‘Don’t think I’m seeing anybody else but I have to go out one night a month.’ ”

Once a month eventually became once a week. And so while Christine was making plans that involved the hired artist from Manchester, Derek was busy secretly cancelling those same plans—because he had spent the last two years in rehearsals perfecting Elvis’s mannerisms in order to give the performance of a lifetime.

“When you’ve been married as long as we have, you have to be cagey,” said Derek.

On the evening of the party, Christine was beside herself: neither the performer she had hired nor Derek were anywhere to be found. However, told by friends that the performance was about to start, she sat down.

“I kept saying, ‘Where’s Derek? He should be here,” said Christine. “And a blond-haired fellow came in with his hair sprayed jet black, a white jumpsuit and did seven songs.”

Christine was gobsmacked. Derek can’t sing a note but managed to lip-synch so convincingly that the next day, the phone was all but ringing off the hook with people wanting to hire Derek to give an encore performance. Derek was keen—with the caveat that money be raised for gifts for children in the hospital. The demand for tickets was so great that two concerts were necessary, and the between the two events, over £7,000—approximately CA$14,000. In the intervening years, the demand for the Elvis Charity Show has raised over £77,000 for local charities devoted to the wellbeing of children. Those efforts have been recognized by the highest power in the land.

“We’ve just had an invitation to go to Buckingham Palace for the Queen’s garden party,” said Christine. “Somebody must have put forward our names to be invited, but we don’t know who,” said Derek. “And you’re not requested; you’re commanded.”

Wild in the country

With such an exciting life, the Russells take their off-time seriously. For the last 17 years, they’ve been flying to Calgary, Alberta, and renting an RV through Canadream and touring western Canada.

“We absolutely love it,” said Christine. “The scenery and the people are lovely and we love the wildlife.”

Even though the Russells don’t own an RV and only take to the Canadian highways for two or three weeks at a time each year, their bona fides as dedicated RVers cannot be questioned. Through the years, the Russells have driven several types of RVs, from fifth-wheels to fully loaded class A motorhomes with pop-outs.

“You just have the freedom in your holiday,” said Christine. “If you’re at a hotel, you’ve got to be up before 10 a.m. to check out. You’re all the time watching the clock. But with an RV, we’re up (early) watching the wildlife and looking at the scenery. I wouldn’t want any other holiday at the moment.”

“We like being away on our own,” agreed Derek. “When you sit near the windows of the RV, you’d be surprised at all the animals that come to see you.”

There is no set itinerary for the Russells. After landing in Calgary, they usually spend a couple of days in Kananaskis before heading off in new directions. They’ve travelled to Alaska, where they were blown away by the glaciers near Valdez. Their love of mountain scenery and wildlife took them to Yellowstone during their most recent visit in May. And it was during the journey back across the border that they found themselves in the Waterton region in Southern Alberta.

“It was $15 to go in and we said, OK, we’ll have a day to look,” said Derek, “and four days later we came out. It was absolutely fabulous—we had a brilliant time in there.”

Two years ago, the Russells’ annual trek to Canada was put off when Derek sustained a serious head injury at work and at the time, was not expected to live. Doctors told Christine that if Derek did live, the odds were that he would be disabled. Miraculously, Derek made a full recovery. After returning to work a year after the accident, Derek and Christine took a well deserved vacation and were welcomed back by Canadream with open arms—and chilled bottles of wine waiting to be opened as well. The Russells were touched by the gesture, along with the cards, e-mails and flowers sent by employees during Derek’s recovery.

“I think that was the best holiday we ever had,” said Christine.

The Russells have several productions of the Elvis Charity Show coming up this year but Derek promises a Canadian reunion tour next May, and said they’ll be coming back for as long as they can, come what may. 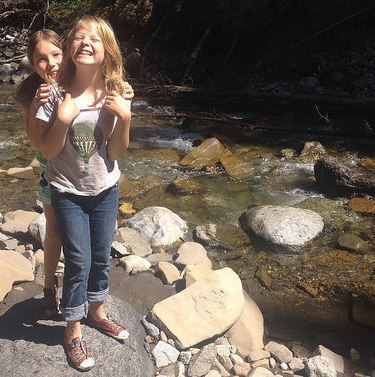 As a lifelong Calgarian, I consider Kananaskis Country to be part of my backyard.

Not an RV and not exactly a motorcycle or an ATV–the only thing it can possibly be is a three-wheeled Spyder.