We've travelled to Alaska 10 times since 1996, but there were a couple of things we had missed that were on our bucket list of things to do. Although we had visited Juneau a number of times, it was only for a few hours as part of a fantastic 12-hour sightseeing tour with Fjord Express. We enjoyed ourselves so much that we knew we had to return to Juneau for an extended time. As luck would have it, the opportunity was offered to us in 2013 as we took our first trip down Inside Passage (but that’s another story.)

Juneau, the capital of the state of Alaska, is unique in that it is the only landlocked capital—being accessible only by air or ferry. It is a community steeped in history and with great scenery, wildlife sightings, attractions, dinning and campgrounds.

During our four days there we made our base of operations the Spruce Meadows RV Park, which is set in a beautiful wooded area approximately 3.7 miles from the ferry and 14 miles to downtown Juneau. It had full hook-ups and Internet, with the benefit of watching a black bear walking down one of the roads. We found it be quiet and well-looked-after, with very friendly owners and easy access to everything we had planned to see. Although we used our vehicle to travel around Juneau, an additional benefit of the campground is that it is on the city bus route, which can be a real bonus if you plan on spending time in downtown Juneau, as parking could be a problem. We did park on a couple of occasions but had to cut our tourist time down and get back to our vehicle before the time expired. This year we don’t plan on making the same mistake.

We still didn’t see all that Juneau had to offer. Maybe next time we will fill in some of the blanks. In spite of the limited time, we had a fantastic time visiting and seeing the following attractions:

On almost every one of our previous trips to Juneau we had taken the time to ride the 548-metre (1800-foot) ascent up Mount Roberts on the Mount Roberts Tram. It is a spectacular ride, with impressive views of downtown Juneau, the docked cruise ships and the surrounding area. In fact on a clear day you can see all the way to Auke Bay, approximately 22 kilometres (13.5 miles) away, where the Alaska Marine Highway ferries dock. After sightseeing from the observation deck, take the time to enjoy the entertainment, wildlife, souvenirs and restaurant like we did before returning to downtown Juneau via the tram.

On our previous trips we have visited fish hatcheries, but had nowhere close to the experience we enjoyed at the Macaulay Salmon Hatchery. Our tour took us behind the scenes to learn how they breed the salmon to a size where they can be released into the wild to enhance the future of the wild salmon industry. We also learned how the salmon know now to come back to the hatchery. It was great learning experience.

The one thing we learned about Juneau was the diversity of its attractions, people, history and scenery, making it a must for us to return. And don’t forget your camera when you visit scenic Juneau.
.

Duane and Lynda Pilson explore the Alaska panhandle in their RV. 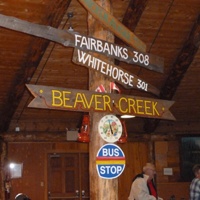