Yuma-based RVer, educator and author JoAnne Mowczko has published The Achuar of the Pastaza River: A Glimpse into Their Rainforest World.

Three years after sharing her experience of travelling to the Ecuadorian Amazon, living with and learning about the native Achuar (pronounced aa-sh-ur) people, Yuma-based RVer, educator and author JoAnne Mowczko has published The Achuar of the Pastaza River: A Glimpse into Their Rainforest World.

Mowczko was inspired to research and write the ecotourism book after she and her husband decided to park their mobile home and fly to the rainforest in 2009, where they stayed at the Kapawi Ecolodge. While at the lodge, Mowczko said she learned about the native Achuar people, who have lived in inaccessible regions of the Ecuadorian rainforest for eons, with limited contact with Westerners until the 1960s.

However, she said she returned home without a full understanding of their indigenous culture, and a year and a half after their trip she submitted a proposal for an ecotourism book with all proceeds from book sales going to the Achuar. The tribe was receptive to the idea, and in 2011 she personally funded a return trip to Kapawi Ecolodge to conduct field research, putting her Bachelor of Science in Education (Biology and Anthropology) to work in examining medicinal plants and the ecosystem and participating in cultural traditions and celebrations.

Mowczko said the experience of researching, writing, editing and self-publishing the book was a “very tedious task,” and that if she were not passionate about the Achuar and the benefit the book will have to them, she would not have been able to dedicate the past four years full-time to the project.

On the other hand, she said that “the experience of staying with the Achuar is unforgettable.”

“They are a wonderful people,” she said. “I miss them.”

Mowczko said she will be continuing to promote the book and that she stays in touch with the lodge as well as an Achuar friend living in Pastaza via Facebook. She hopes to make a return trip to the lodge “whenever (she) has saved enough... and made arrangements with Kapawi."

In the meantime, she and her husband are planning to take an RV trip to the East Coast this summer to visit family and friends.

“We always take different routes and stop at national parks and monuments,” she said. “We collect the park passport stamps.”

For fellow RVers who may have an interest in writing a book, Mowczko advised that knowing your word processing program well will save a lot of problems, and that self-publishing sites are making the process more user-friendly. She also offered words of encouragement.

“It is very exciting when you see your first book in print,” she said.

The Achuar of the Pastaza River: A Glimpse into Their Rainforest World is available for purchase on amazon.com. 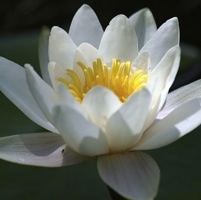 A practical guide to prairie flowers, herbs and plants

The book Water and Wetland Plants of the Prairie Provinces is an excellent source of information about the flowers, herbs and plants you may find in the Prairies.

Reader is unafraid to try the unusual, and it is a testament to his skill as a chef that he can create both classic and unprecedented dishes with equal flair.
by Danielle Cameron
>